Diamond Jubilee celebrating Queen of England hosting genocide-accused Sinhala President Mahinda Rajapaksa evokes spontaneous responses from the leadershipless Eezham Tamils all over the world. The responses emanating from dormant anger are actually addressed to the so-called international community and more than that, are directed against the mediocre claimants for leadership among Eezham Tamils who would not dare to take a step without getting ‘signals’ from the masters in the IC, commented a veteran Tamil political observer in London. Commenting further on the Sinhalese in London welcoming Rajapaksa, he said the Tamils have no qualms about it. The Sinhala nation has every right to seek recognition and it should articulate in every possible way. Our problem is the adamant refusal of the IC and India to see that there are two nations in the island, he said. 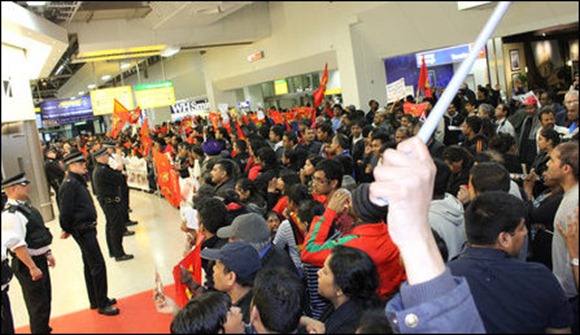 Several hundreds of Eezham Tamils in London spontaneously gathered at the Terminal 4 of the Heathrow Airport on Sunday evening, holding placards and demanding the UK government not to allow entry to genocide-accused Rajapaksa in London.

The Scotland Yard allegedly leaked news that Rajapaksa would be arriving on Sunday night by a Sri Lankan Airways flight, deliberately to mislead the demonstrators, where as he arrived at London only on Monday morning, Tamil activists sources in UK told TamilNet. 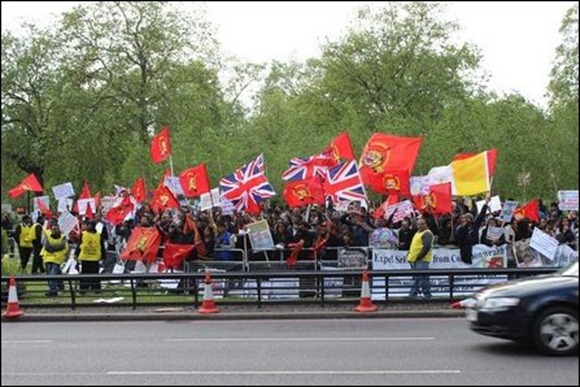 Tamil demonstrators outside the Park Lane Hilton Hotel on Monday

On Monday noon several hundreds of Eezham Tamils belonging to various organisations, and especially the second generation youth, gathered outside the Park Lane Hilton hotel in London, where Rajapaksa was staying and demonstrated for nearly six hours. The demonstrators accused Rajapaksa of genocide and urged the British government to arrest him.

A group of Sinhalese have also arrived on coaches to exhibit their support to the Sri Lankan president, demonstrating with Sri Lankan flags opposite the Eezham Tamils. 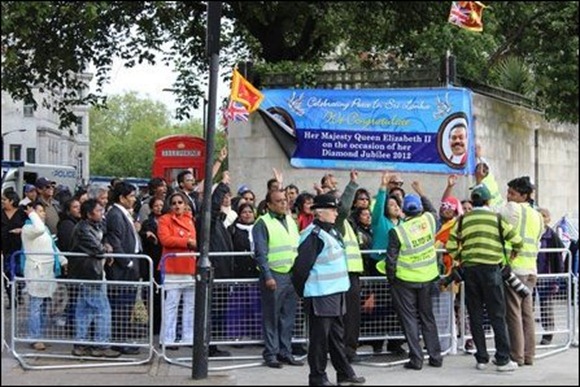 Rajapaksa being whisked away from the hotel, amidst demonstrations

A few months back, before passing resolution on Sri Lanka at the Geneva UNHRC, some US officials meeting civil society in Jaffna told its members that there was no likelihood of war crimes investigations, as enough pressure has not come from the affected people.

The affected people in the island are gagged. In the free diaspora, claimants for leadership afraid of raising any voice against the erring international community, are sitting on any democratic struggle of the masses, even when the people are prepared. Tamils should not make the IC angry is their song. They wait for ‘signals’ to come from the IC to take even a small move. After diffusing tension by passing a resolution in the State Assembly the Tamil Nadu Chief Minister is keeping quiet. From where on earth the pressure would come when the forces that seek pressure and sit on pressure are the same, asked the political observer in London.

Mahinda Rajapaksa will be welcomed everywhere and he will be needed by everyone as recognition to State criminality is a globally on-going trend taking place behind the back of the masses. One has to take a special note that he will be addressing the Commonwealth Economic Forum organized by Commonwealth Business Council, the observer pointed out.

“Not only from the USA, UK and EU to India, China and Russia that find him useful; but also from Vietnam for which Eezham Tamils wrote on the walls in 1960s to the Tamil foreign minister of Singapore, want to do business with him. Rajapaksa has become a symbol and inspiration for the new world order based on global criminalisation of State. Unless the alternative world of peoples shows its collective strength nothing would happen.

“By spontaneously staging an uprising Eezham Tamils could at least get rid of mediocrity and evolve a suitable leadership needed for them by the times. In the late 1980s we have seen how dangerous a leadership could be when it is ‘installed’ from the outside. If we do not prepare our leadership properly, we will once again get into such a situation. Mediocrity will always take politics away from people.

“The queen’s jubilee attended by Rajapaksa is an occasion for global Tamils and Tamils in the Commonwealth to show their solidarity in passing the message to the so-called international community and a Commonwealth that didn’t act on the question of Eezham Tamils. The queen is head of state not only in the UK but also in Canada, Australia and New Zealand,” the veteran political observer in London pointed out.