A meeting in the City of London, due to have been addressed on Wednesday morning by the president of Sri Lanka, has been cancelled, owing to concerns over policing amid the threat of large demonstrations by Tamil rights groups.

But Mahinda Rajapakse – whose presidency has been tainted by persistent allegations of war crimes committed by Sri Lankan armed forces – will still attend a lunch for the Queen, hosted by the Commonwealth secretary general at Marlborough House on Pall Mall.

The president was first to have given the keynote speech at a special Diamond Jubilee meeting of the Commonwealth Economic Forum, at 10am.  On its website, the event’s organisers, the Commonwealth Business Council, simply states that “After careful consideration, the morning sessions of the Forum…  will not take place.”  It had pre-sold tickets to the event at £795 +VAT each.

Channel 4 News was unable to obtain a response from the CBC.  A spokesman for Scotland Yard told Channel 4 News that while it had agreed to guarantee the president’s security, the CBC had “decided it was not in their interest to stage the event” due to excessive policing requirements and the likely disruption to business in the City of London.

Sen Kandiah, founder of the British Tamil Forum, said:  “Common sense has prevailed.  There is now enough evidence that allegations of war crimes in Sri Lanka lead directly to the president himself.  That is why British government officials are reluctant to meet him. He is not welcome here.” 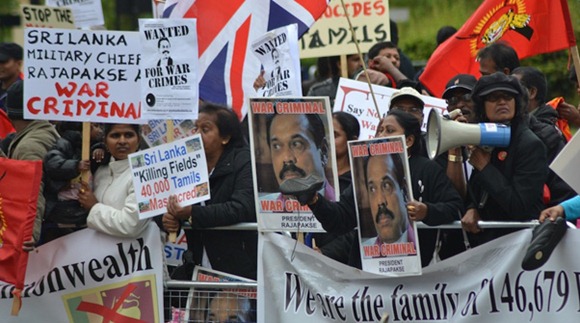 An expert panel appointed by the United Nations Secretary General concluded that there were credible allegations of war crimes in Sri Lanka, allegations substantiated by human rights groups and persistent reports broadcast over many months by Channel 4 News .  Human rights abuses are still reported to be widespread.

In December 2010, during the president’s last visit to the United Kingdom, his planned address to the Oxford Union debating society was cancelled because of similar security concerns.

In a statement at the time, President Rajapakse said “I am very sorry this has had to be cancelled, but I will continue to seek venues in the UK and elsewhere where I can talk about my future vision for Sri Lanka.”  Tomorrow’s speech was to have been his first such address in the UK since the Oxford event was cancelled.

While protesting against what is widely viewed as the president’s inappropriate invitation, Tamil rights groups insist that they have no intention of interfering with the Queen’s jubilee celebrations.

Richard Uku, spokesman for the Commonwealth Secretary General, told Channel 4 News:  “The secretary general invited all heads of government to this lunch and Mr Rajapakse is one of them.  Sri Lanka, unlike Fiji, has not been suspended from the Commonwealth.  This doesn’t take anything away from our commitment to the Commonwealth’s core values, of which human rights is key.”

It is understood that about a dozen of the Commonwealth’s 53 current heads of state will be attending lunch with the Queen. 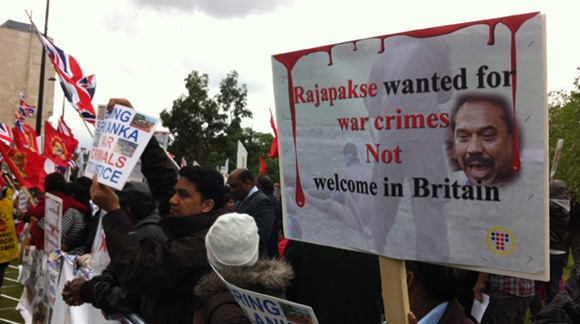 Fred Carver, Director of the Sri Lanka Campaign for Peace and Justice said, however, that at the recent UN Human Rights Council vote which admonished Sri Lanka for its failure to hold alleged war criminals to account, Commonwealth countries such as India and Nigeria took the lead.

“They will rightly feel betrayed,” he said, “if they see the the Commonwealth leadership undoing their work by treating Rajapakse as a superstar.

“What is the Commonwealth for if it is not a community of shared values? And what shared values could possibly include murdering journalists with impunity, treating minorities as second-class citizens, and covering up the worst war crimes of the new millennium?”

After visiting London, President Rajapakse is scheduled to fly on to Rome, for an audience with the Pope at the Vatican.  Before he leaves, Tamil campaign groups in the UK plan to launch legal efforts to highlight the president’s alleged command responsibility for war crimes and crimes against humanity.

The organisation Tamils Against Genocide has written to the Metropolitan Police making a formal complaint against the president’s alleged involvement in war crimes and requesting that the Met opens an investigation.  As president, however, Mahinda Rajapakse enjoys absolute immunity from prosecution.

Separately, lawyers acting for the Global Tamil Forum have written to the home secretary asking that visas granted to two members of the president’s security retinue be withdrawn.  The GTF is seeking the prosecution of the men, both senior police officers, under the convention against torture.

Torture is reported to be systematic and widespread in Sri Lanka, much of it allegedly carried out by police.  This has been widely documented by human rights groups and was reported by Channel 4 News last November.

In December 2010, President Rajapakse left the UK ahead of schedule following news that arrest warrants were about to be issued for two members of presidential security who were former members of the Sri Lankan armed forces.