Further evidence has emerged of the brutal treatment of Tamils by Sri Lankan soldiers during the closing stages of the country’s civil war. Video footage obtained by The Independent shows soldiers gloating over a pile of more than 100 Tamil corpses, including dozens of women who have been deliberately stripped of their clothes to expose their breasts and genitals. 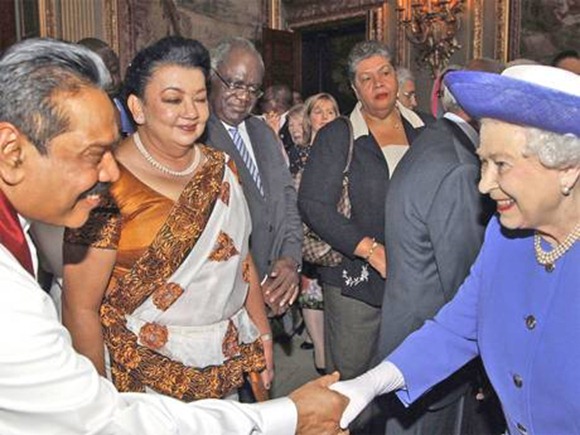 The videos are part of a growing body of evidence which has emerged over the past two years – much of which was recorded by Sri Lankan soldiers – revealing how many Tamils were tortured, summarily executed and often humiliated after their deaths for the entertainment of their victors.

The latest footage – which was smuggled out of Sri Lanka by a man who used to work at an internet café frequented by soldiers, and passed to The Independent – emerged as thousands of angry Tamil demonstrators massed outside the Commonwealth’s headquarters in London yesterday in protest at a lunch hosted by the Queen, which was attended by Sri Lanka’s controversial President, Mahinda Rajapaksa.

Angry chants could be heard as the Queen entered Malborough House off Pall Mall and organisers were forced to cancel a planned speech by Mr Rajapaksa following security concerns.

Tens of thousands of civilians, soldiers and Tamil insurgents were killed in the final stages of Sri Lanka’s 30-year civil war, which ended in 2009 with the destruction of the Liberation Tigers of Tamil Eelam separatist group.

Human rights groups and the UN have produced evidence that both sides committed war crimes during the final stages of the conflict. But there has been particular criticism aimed at Mr Rajapaksa’s government, which has refused to hold any independent inquiry into Sri Lankan army atrocities despite compelling evidence. 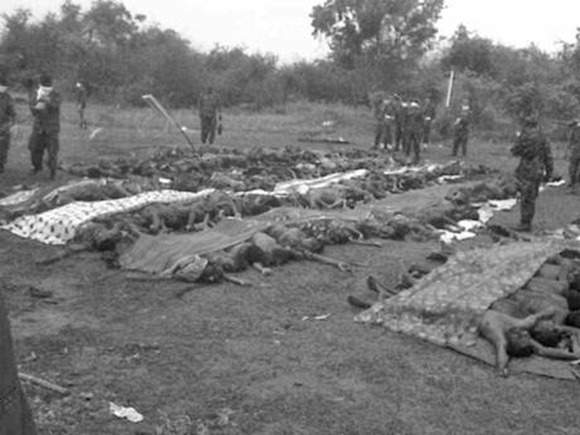 The latest videos obtained by The Independent reveal how – even after death – Tamils were often treated with contempt by Sinhalese soldiers. The black-and-white mobile phone footage shows more than 100 corpses laid out on tarpaulins. Some of the male victims are clad in the striped camouflage worn by the Tamil Tigers but the majority are dressed in civilian clothes.

It is impossible to say whether the victims were combatants, civilians or both. Tamil Tigers were known to use civilians as human shields, while Sri Lanka’s army has been accused of deliberately shelling civilian areas as it pushed ahead with its final onslaught against the LTTE.

What is clear, however, is the special treatment reserved for bodies of female Tamils. While the majority of men are fully clothed or topless, almost all the women featured in the video have been deliberately stripped naked or had their breasts and genitals exposed. Within Sri Lankan culture it is considered deeply shameful for a woman to expose any skin that would normally be covered by a sari or clothing.

Previous footage has emerged of Tamil women stripped naked either before or after their death whilst human rights groups have continue to document reports of rape and sexual violence by soldiers. In one particularly well known example uncovered by Channel 4 last year, Sri Lankan soldiers took victory photos of the corpse of prominent Tamil news reporter Isaippiriya. In many of the shots she was naked and had her hands tied behind her back prompting concerns that she might have been raped before being executed.

Charu Lata Hogg, an expert on Sri Lanka at Chatham House, says the footage fits into a wider pattern of abuse meted out to Tamils. “There is credible evidence in the public domain which suggests Sri Lankan troops used degrading and humiliating behaviour towards both male and female Tamils, civilians and combatants alike, during the final stages of the conflict,” she said. “The UN goes as far as to say that the ‘screening process’ directly resulted in executions, disappearances and rape of some LTTE suspects.”

Despite the emergence of scores of videos shot by civilians and soldiers during the war, the Sri Lankan government has routinely denied that its forces were responsible for atrocities and claims that such footage is faked.

When informed of the new videos yesterday, President Mahinda’s spokesperson Bandula Jayasekara told The Independent: “This is a continuation of a famous fairy tale. These videos are an attempt to discredit the government of Sri Lanka and Sri Lanka’s forces. These guys are masters of propaganda; they have been doing this for 30 years.”

But Vasuki Maruhathas, a London based solicitor who obtained the video footage from a client and handed it to The Independent, said she believed the footage was genuine. She said the video was smuggled out of the country because her client – who wishes to remain nameless – worked at an internet café which was often frequented by soldiers. He was regularly asked to back up their phones or download videos and photos so they could email them.

The Independent has viewed 32 videos and 26 photos that appear to have been taken by the same phone. Most show pictures show a pile of corpses at an unknown location whilst seven photos show what appear to be captured Tamil Tiger fighters handcuffed inside a bus. Some of them are children.

The footage appears to have been taken by female Sri Lankan soldier. Her voice and that of her colleagues, all of whom speak in Sinahalese, can be heard in numerous videos and seen two others riding in a military vehicle. The last video appears to show the solider back at home with her family.

“It would very hard for all of these to be a forgery,” said Miss Maruhathas. “It clearly tells a story of this female soldier.”

Asked why Sri Lankan soldiers might have stripped the women naked she replied: “There are clearly two possibilities. Either they were raped and sexually assaulted before they died, or they were stripped after their deaths. Only animals would do something like this”.

The High Commission of the Maldives wasted little time in ensuring that the media were aware their newly inaugurated President was on the "illustrious roster of guests" invited to meet the Queen for her jubilee celebrations. In a press release sent out yesterday, they remarked that Dr Mohamed Waheed was even sitting on the same table as the Prime Minister, David Cameron.

The tiny Indian Ocean atoll is currently trying to repair its reputation following allegations that Dr Waheed’s predecessor was forced out in a military coup. Mohamed Nasheed, who spent much of his adult career imprisoned for his opposition to the Maldivian strongman Maumoon Abdul Gayoom, swept to power in 2008 on a wave of popular opinion. He was dubbed the "Mandela of the Maldives" but his political career disintegrated earlier this year when protesters, backed by the military and police, forced him out.

He says he was forced to resign "at gunpoint" but Dr Waheed’s new government – which is backed by the military – insists the surprise transfer of power was voluntary.

It wasn’t just rights abusers on yesterday’s guest list. Tax havens were handsomely represented at the lunch with Commonwealth leaders. The group’s membership includes numerous Caribbean states that have provided sanctuary to many British tycoons hoping to reduce their tax bills.

Denzil Douglas, the Prime Minister of St Kitts and Nevis, was the only head of state of a tax haven to appear at the lunch but High Commissioners of the Seychelles, Antigua and Barbuda, the Bahamas, St Lucia, Barbados and Grenada also made an appearance.

Tony Blair missed the jubilee celebrations in the UK, choosing instead to holiday in the Maldives, risking accusations that he is giving the country’s regime political credibility. The Blair family arrived in the country on Saturday.