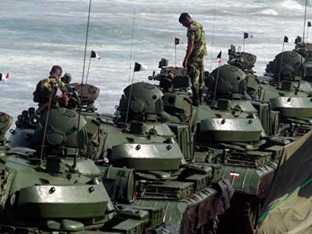 Although the much-hyped UNHRC resolution ended up as a toothless instrument against the alleged human rights violations and war crimes by Sri Lanka, fresh evidence of brutality by its army against its own citizens continue to taint its image.

On Thursday, The Independent newspaper of the UK reported that it is in possession of video footage that shows Sri Lankan soldiers “gloating over” a pile of about 100 human bodies, including a dozen women, in the closing stages of the war.

While men were mostly clothed, the women were stripped naked with their breasts and genitals exposed, indicating possible sexual abuse, before or after death, as had been alleged earlier by human rights activists.

The sensational Killing Fields documentaries by UK’s Channel 4 on the alleged war crimes by the Sri Lankan army also had featured footages showing bodies of Tamil women stripped naked till below the waist. The most poignant among them was that of Isaipriya, a popular Tamil newsreader in Jaffna.

The Independent said that the video was smuggled out by an attendant of an Internet cafe which was frequented by soldiers who had shot them using their mobile phones.

“The Independent has viewed 32 videos and 26 photos that appear to have been taken by the same phone. Most show pictures show a pile of corpses at an unknown location whilst seven photos show what appear to be captured Tamil Tiger fighters handcuffed inside a bus. Some of them are children,” the paper said.

“The footage appears to have been taken by female Sri Lankan soldier. Her voice and that of her colleagues, all of whom speak in Sinhalese, can be heard in numerous videos and seen two others riding in a military vehicle. The last video appears to show the solider back at home with her family.”

The paper also quoted the Sri Lankan President’s spokesperson, who has dismissed the video as a continuing fairytale.

“This is a continuation of a famous fairy tale. These videos are an attempt to discredit the government of Sri Lanka and Sri Lanka’s forces. These guys are masters of propaganda; they have been doing this for 30 years”, said Bandula Jayasekera.

Other than the Tamil diaspora’s protest marches in Europe, strident voices by European countries and the US, and the cancellation of of the speech by President Mahinda Rajapaksa at the Commonwealth Economic Forum earlier this week, the evidence of alleged war crimes or human rights violations do not seem to have impacted the Sri Lankan government’s international relations in any way.

Perhaps bolstered by the tacit support by India and the new bilateral relations with some African and East Asian countries following their support in opposing the UNHRC resolution, the Sri Lankan establishment continues to be defiant.

While the western nations and international community have asked him to withdraw the army from the north and the east, Rajapaksa recently repeated his justification for militarising the Tamil areas and said that there will be no pull-out. All the International pressure seems to be mere posturing without a purpose.

Although there was considerable excitement about the UNHRC resolution, which saw the Sri Lankan government deputing a jumbo delegation to Geneva and western countries indulging in an overt campaign for support, there has been  no follow up.

Has the council taken any effort to implement the steps identified in the resolution?

So far there hasn’t been any update on that. Anyway, any step, according to the watered down version, will be subject to the pleasure of the Sri Lankan government.

Will Sri Lanka ever say yes?

When asked tough questions, its most predictable behavior on the part of the Sri Lankan government is cancellation of visas and expulsion. On 6 June, the government turned away the head of Channel 4 diversity and his wife, who incidentally is a Sri Lankan Tamil, at the Colombo airport.