Conveying solidarity with the Eezham Tamil refugees illegally detained in the Chengalpet ‘special camp’, Tamils in Germany demonstrated in front of the Indian Embassy in Berlin today, demanding India to close “such inhuman detention facilities and treat the genocide affected Eelam Tamil refugees like others who have entered its territory for sanctuary from persecution” and urging the UN to compel India to adhere to the standards of the UNHCR. Speaking at the demonstration Vithya Jeyasangar, a democratically elected Eezham Tamil representative from Berlin now working with the VETD, said “After assisting the Sri Lankan government with the structural genocide of the Eelam Tamils, and bartering with the Mahinda regime for economic slices in the Tamil homeland, India is showing its naked contempt for world Tamils through its inhuman treatment of Tamil refugees.” 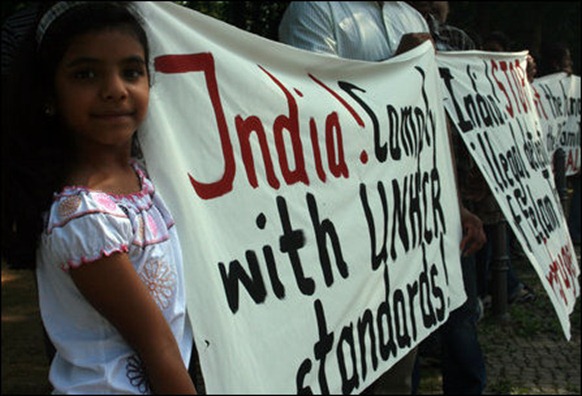 The demonstration, organized by the Country Council of Eezham Tamils in Germany (VETD), raised slogans and placards calling for the closure of the Chengalpet camp, comparing it with Guantanamo Bay, and for India to immediately release the 29 Tamil detainees at Chengalpet.

A petition was given to Indian embassy with the above demands and also urging India to stop criminalizing the Eezham Tamil nation and to keep the other refugee camps open to access by NGO’s and independent human rights organizations.

Sources in Berlin told TamilNet that German security guards from the Indian embassy dissuaded German people among the demonstrators who were there to show their solidarity to not participate in the demonstration as the protesters were doing propaganda against the Indian government.

Photos of the demonstrators were also taken by employees in the embassy.

“After losing everything except life due to Sri Lankan government’s genocidal war on the Eezham Tamil nation, they have entered Tamil Nadu, home of 70 million Tamils, hoping to at least live there. If even there they are going to be treated as subhumans, what is the message India is trying to send to the Tamils?” Ms. Jeyasangar asked at the demonstration.

A demonstration involving different Tamil Nadu political outfits and civil groups is scheduled to happen at Chengalpet on Saturday, and a protest outside the Indian Embassy in London called for by the TCC-UK is to happen on Tuesday.

Likewise, a press release dated 29 June by civil society organizations in Karnataka has also called for the closure of the Chengalpet prison camp, and for improvement of conditions in all other refugee camps.

"Overall, the Chengalpattu refugee camp is neither functioning as a prison run in accordance with human rights laws nor as a refugee camp where rights are guaranteed. Rather it’s clear that it is functioning as a illegal detention camp. These refugees are neither treated by the international Refugee law (UNHCR) nor by the Indian Penal Code," the release said. 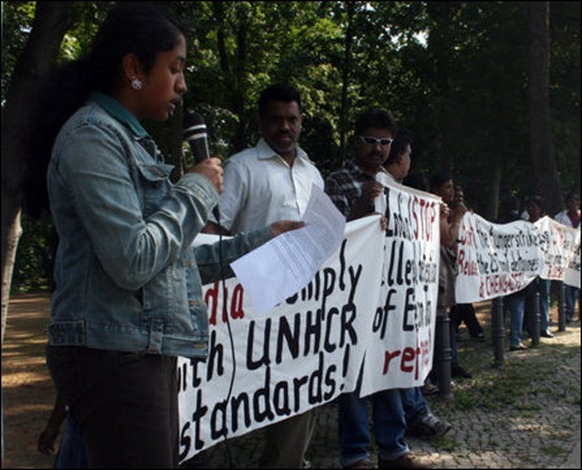 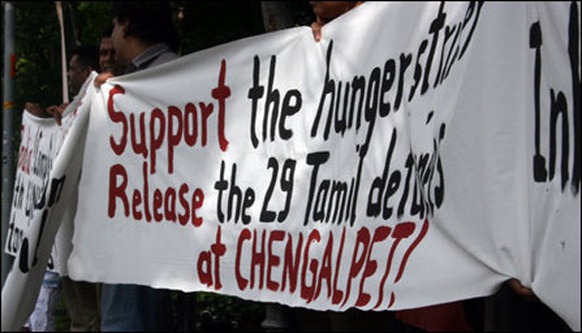