In the final days of Sri Lanka’s civil war, as the army closed in for the kill against Tamil Tiger rebels, tens of thousands of civilians cowered in the crossfire.

“The children were crying because they were so hungry, so when we heard congee in coconut soup was being given out, we let them leave the bunker where we were sheltering,” a 35-year-old woman from the northern district of Thunukkai recalled recently. “Then the army bombed the place. Most of the kids were killed on the spot, including my son.” 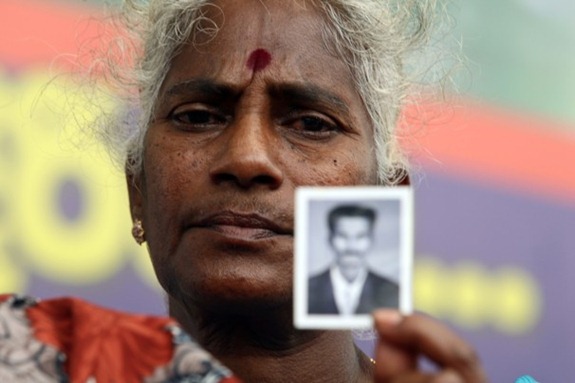 Buddhika Weerasinghe/Getty Images – Senevirathnam Wasanayagi 63, relative of a detained Tamil Tiger rebel suspect cries as she holds up a photo of her son during a protest outside the main prison on May 29, 2012 in Colombo, Sri Lanka. Wasanayagi said, her son was arrested by government military in 2008 at when he was attending a religious ceremony at Hindu temple.

Three years have passed since the end of the war. But for members of the Tamil minority of northern Sri Lanka — who suffered a heavy civilian death toll during the three-decade conflict, and years of fear and oppression when the Tigers controlled the area — the peace has been a painful disappointment.

Gathering in a spot that they judged safe enough to speak freely, a group of Tamil women recounted the daily humiliation of life under the victorious Sri Lankan army — almost exclusively made up of ethnic Sinhalese Buddhists.

Twice a month, the women said, soldiers enter their homes to photograph everyone. Permission from the military is required for even the smallest gathering or just to collect firewood in the nearby forest.

“I even have to go and ask someone for permission to have a birthday party for my daughter in my own home,” said a 46-year-old mother of six from the Kandavalai area. Like the others, she spoke on the condition of anonymity, fearful that revealing their names could endanger their lives. “And if they say no, I am not going to have a party for my 8-year-old daughter in my own house.”

The women described how they were forced or tricked to attend demonstrations in support of the government and against its foreign critics. One said villagers were not allowed to light a single prayer candle in their local church, because the army suspected them of trying to honor dead Tamil Tiger fighters buried nearby.

Another woman complained about soldiers turning up in her kitchen and demanding a cup of coffee. “We are scared,” said the mother of six. “More than that, I am frustrated, I am angry. It is a feeling you cannot describe.”

‘The military decides everything’

The Liberation Tigers of Tamil Eelam were ostensibly established in 1976 to defend the rights of Sri Lanka’s Hindu and Christian Tamils. But the group ended up ruling huge swaths of northern and eastern Sri Lanka for more than two decades through violence and fear, forcibly recruiting children as soldiers, executing opponents and using suicide bombers as part of their campaign of terrorism.

The United Nations has called for an investigation into the final stages of the civil war, accusing the Tigers of using civilians as human shields but also accusing the army of indiscriminate shelling and of denying civilians access to humanitarian aid. It estimates that 40,000 innocent people may have died.

Today, without any fighting to do, soldiers attend meetings at Hindu temples and functions at primary schools. The military has inserted itself into almost every aspect of economic life in the north of the country — farming and selling vegetables, running hotels, restaurants and even barbershops.

Tamils feel as if they are living under an army of occupation, said Father S.M. Praveen, who runs the Center for Peace and Reconciliation in the northern town of Jaffna. “It is like an open prison,” he said. “The military decides everything.”

Four of his workers, who were documenting alleged human rights abuses and land grabs by the army, received death threats or were attacked by thugs who threw oil on them, the latest method of intimidating those who criticize the government or army. All four have been forced into hiding, he said.