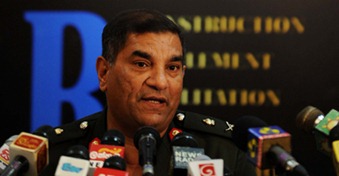 Sri Lanka Army on Wednesday (11) said that no one can challenge or dispute the right of the Sri Lanka army to be serving anywhere in the country.

“No one can challenge or dispute the right of the Army to be serving anywhere in the country. It is their prerogative and area of responsibility. The public in Jaffna overwhelmingly support the Army presence and they know very well it is the Army who will come to their help in the event of any emergency. I don’t think the Jaffna public would ever dare to allow the Army to move out in any case,” Army Chief Jagath Jayasuriya told media this evening in Colombo.

The Commander made this comment responding to a question, that troops in the Jaffna peninsula remain confined to their military formations, performing their routine legitimate duties, similar to the roles and tasks of any other Army.

“Like any other Army in the world, we, in the Army as directed by the government have thrown our full weight behind the country’s post-conflict recovery machine and infrastructure development tasks and roles. It has been amply proved that our commitment for any development project could perform comparatively much faster and more effective than any other civil organization could do. Everywhere in the world, the armies play a vital role in post-conflict situations and Sri Lanka remains no exception”, the Commander said.

The commander was addressing a press conference on the forthcoming international defence seminar to be held in Colombo next month said that more than 63 countries in the world have been invited to attend the three-day ‘Defence Seminar – 2012’ in Colombo with a view to sharing and discussing post-conflict experiences on the road to recovery and reconciliatory moves, designed for long-lasting peace and stability.

“Final arrangements are now in progress to hold the Army-initiated international ‘Defence Seminar – 2012’, titled ‘Towards Lasting Peace and Stability’ from August 08-10, 2012 at Colombo Galadari Hotel and it is focused on the thematic 5Rs (Reconstruction, Resettlement, Rehabilitation, Reintegration, Reconciliation) in post-conflict Sri Lanka,” he said.

By yesterday, a total of 24 representatives from 14 countries have already confirmed their participation in the deliberations. In addition, a few more dozens of other foreign destinations are in close contact with the Army for onward arrangements, the commander.(SD)