Death threats to editors, police raids on websites, abduction and intimidation of journalists: the protesters had many complaints

Sri Lankan journalists, activists and opposition lawmakers have staged a protest against media suppression and intimidation after the editor of a newspaper received a death threat from the president’s brother.

Dozens of protesters gathered in the capital, Colombo, on Thursday. They denounced a recent police raid on websites critical of the government, as well as the alleged attempted abduction of a journalist, and secret police allegedly collecting journalists’ personal information. 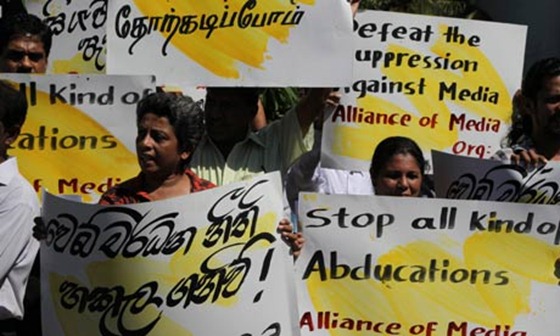 Journalists in Colombo protest against what they claim is media suppression, abduction of journalists and intimidation. Photograph: Pushpa Kumara/EPA

One protester was Frederica Jansz, editor-in-chief of the Sunday Leader, whose slogan is "unbowed and unafraid". Last week Jansz was warned by Gotabaya Rajapaksa, Sri Lanka‘s defence secretary and brother of the country’s president, Mahinda Rajapaksa, that "people will kill you" after she asked uncomfortable questions about his alleged abuse of power.

Jansz had called Gotabaya Rajapaksa for comments on allegations he had abused his family connections to try to get a puppy flown out to him from Zurich, resulting in 56 paying passengers being shunted off a scheduled flight.

Management of SriLankan Airlines allegedly downgraded the size of the plane that was scheduled to fly from Zurich on Friday 13 July so that one of Rajapaksa’s friends could fly the jet. The new pilot was to be captain Praveen Wijesinghe, who is dating flight officer Madini Chandradasa, the niece of the president. Wijesinghe was unqualified to fly the original jet.

Rajapaksa confirmed the puppy story when Jansz called, saying, "I have every right to bring not just a dog, but an elephant if I so wish". But he threatened to sue Jansz if she reported it.

After Jansz made inquiries, SriLankan Airlines reversed the decision, so she called Rajapaksa to tell him she was spiking the story – not because he had threatened her, but because there would be no revenue loss for the state-owned airline.

Again threatening Jansz with legal action, he continued: "I will put you in jail. You shit journalist trying to split this country – trying to show otherwise from true Sinhala Buddhists! You are helped by the US ambassador, NGOs and Paikiasothy [believed to be a reference to Paikiasothy Saravanamuttu, a human rights activist and prominent critic of the Sri Lankan government] – they pay you!"

When Jansz said, "I hope you can hear yourself, Mr Rajapaksa", he responded: "People will kill you. People hate you. They will kill you."

Jansz asked whether he would order the killing. "What? No," he said. "Not mine. But they will kill you – you dirty fucking shit journalist."

Jansz told the Guardian that after 24 years as a journalist, she was in constant despair with the situation in Sri Lanka. "The Sri Lankan media has been browbeaten into submission – there is such fear psychosis around that the media practises self censorship," she said.

Gotabaya Rajapaksa did not respond to the Guardian’s calls for comment. In 2007 he was condemned after threatening to "exterminate" a journalist on Sri Lanka’s Daily Mirror newspaper (http://www.protectionline.org/Champika-Liyanaarachchi-Threats.html).

Reporters Without Borders, which defends press freedom around the world, condemned Rajapaksa’s behaviour. "We call on defence minister Rajapaksa to stop threatening journalists who are doing their job," it said. "In many countries, a government official would have to resign for making such comments and would probably be subject to a criminal prosecution."

PEN International, the charity supporting writers worldwide, reiterated its concern for the safety of journalists in Sri Lanka, many of whom it said are attacked and threatened, with apparent impunity, for their reporting. In a statement, PEN called for a "full investigation into the threats against Frederica Jansz and for immediate assurances of her safety".

The Sunday Leader has not shied away from investigating the Rajapaksa brothers. It paid a heavy price for its crusade against the regime when its founding editor, Lasantha Wikramatunga, was assassinated in 2009.

Lasantha had a premonition about his death and had written an editorial a few days before his assassination in which he referred to President Rajapaksa.

Jansz, who took over as editor after Lasantha’s murder, has also received threats to her life, but she has refused to be be silenced.

Sunil Jayasekara, a media rights activist who protested on Thursday’s march, said the government had begun "a new round to intimidate journalists and suppress the independent media".