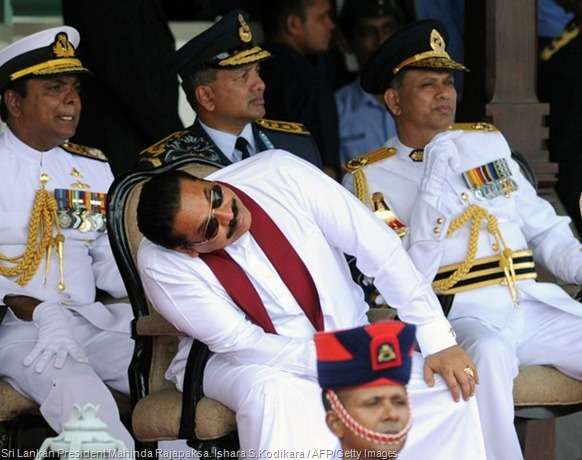 The defeat of one of the world’s largest and most lethal terrorist organizations — and the end of a three-decade civil war – should have heralded a bright new dawn for the tropical Indian Ocean island of Sri Lanka.

The economy is one of Asia’s fastest growing, and tourism is booming. But three years after the war ended, human rights groups and opposition leaders warn that the country is descending toward dictatorship, with dissent brutally crushed, the media cowed and the minority Tamils, whose insurrection caused the war in the first place, still treated like second-class citizens.

The United States and India, Sri Lanka’s two main trading partners, had largely looked the other way as the government crushed the Tamil Tiger rebels three years ago in a campaign that left between 7,721 and 40,000 people dead, according to U.N. estimates. But the two countries have expressed frustration at the lack of postwar reconciliation and urged Sri Lanka to do more to protect human rights.

At the same time, Washington and New Delhi have found themselves increasingly marginalized, their leverage limited as the government in Colombo has forged close economic and diplomatic links with China and Iran.

“The Sri Lanka government have the wind in their sails, and they want to define the future of their country on their own terms,” said Harsh V. Pant, who teaches at the Department of Defense Studies at King’s College in London. “It is going to be very difficult for outsiders like India and America to influence anything domestically. And if Sri Lanka has problems in international institutions, they know they can rely on China.”

At the height of their power, the Liberation Tigers of Tamil Eelam (LTTE) ran vast swathes of Tamil-dominated northern and eastern Sri Lanka as a virtual mini-state. But they had also turned a struggle for the rights of the island’s Hindu and Christian Tamils into a terrorist campaign involving suicide bombers and child soldiers — assassinating anyone who stood in their way, including thousands of moderate Tamils, a Sri Lankan president and former Indian prime minister Rajiv Gandhi in 1991.

But after a long stalemate, the Sri Lankan government of President Mahinda Rajapaksa took the war to the Tigers with unprecedented ruthlessness and single-mindedness.

As the scorched earth campaign entered its final stages in 2009, it cost tens of thousands of lives – a U.N. report called for an investigation into war crimes by both sides, accusing the Tigers of using civilians as human shields and the Sri Lankan military of indiscriminate shelling and denying civilians access to humanitarian aid.

Rajapaksa is enormously popular among the island’s Buddhist Sinhala majority for ridding this country of 20 million of the specter of terrorism and war, but critics say he is in danger of squandering the peace.

The military still runs northern and eastern Sri Lanka, with locals complaining that its control of every aspect of daily life is deeply intrusive and humiliating, and that anyone who challenge it risks deadly retribution.

But the disappearances of government opponents are perhaps the most obvious manifestation of a regime gone wrong, human rights groups say.

This year, 52 people have gone missing in the south of the country.

Most who have disappeared since the end of the war are Tamils, but also at risk are moderate Sinhalese who raise their voices. In 2009, a prominent newspaper editor was shot and killed; in January 2010, a cartoonist and political analyst, Prageeth Eknaligoda, left his office and was never seen again.

A few months before, Eknaligoda had been handcuffed and bundled into one of the white vans that have become the symbol of the disappearances here. He was released the next day but subsequently faced several death threats for his denunciation of rampant corruption within the government, said his wife, Sandya.

The Committee to Protect Journalists says that 23 journalists have been forced into exile since 2007 and that only three have returned. Self-censorship is widespread, but still the intimidation continues. The Sri Lankan police recently raided the offices of two Web sites and arrested nine journalists for “propagating false and unethical news on Sri Lanka.”

The U.S. Embassy in Colombo expressed its “deep concern over efforts to suppress independent news media” and called for the harassment to end. Reporters Without Borders ranks Sri Lanka 163 out of 179 nations on its global Press Freedom Index.

Foreign Minister G.L. Peiris said the accusations about disappearances and intimidation are vastly overblown, a “cloud” thrown up by people who want to claim political asylum abroad.

“Whatever happens, the finger is pointed at the government,” he said.

Firm grip on reins of power

There was a flicker of hope after the war when President Rajapaksa set up a Lessons Learned and Reconciliation Committee, known as the LLRC, though human rights groups had low expectations of the handpicked tribunal.

After an 18-month inquiry, the committee cleared the army of systematic human rights abuses but called for a few individual incidents to be investigated. More forcefully, it recommended a series of measures to promote postwar reconciliation, including the demilitarization of the north of the country and the investigation of disappearances.

But even those limited recommendations have so far proved beyond a Sri Lankan government that has held the reins of power tightly.

After a thumping election victory in 2010, Rajapaksa changed the constitution not only to increase his powers over the police, judiciary and civil service, but also to end the two-term limit for the presidency. He then arrested his opponent in the elections, Sarath Fonseka, and jailed him for two years.

The president’s brother Gotabhaya runs the security apparatus and parts of the economy through the Ministry of Defense and Urban Development; another brother, Basil, heads the Ministry of Economic Development, and a third is parliamentary speaker. Other close family members serve as ambassadors or chief ministers, while a nephew runs the state airline. Corruption, business leaders and lawyers say, is at an all-time high.

In March the United States, with India’s backing, sponsored a resolution at the U.N. Human Rights Council urging Sri Lanka to act on the recommendations of its own reconciliation commission.

The Sri Lankans reacted with anger, organizing almost daily protests outside the U.S. Embassy in Colombo and using state-run media to denounce those Sri Lankans who had testified against the government in Geneva as “traitors.”

Indian attempts to prod Sri Lanka were also rebuffed. India’s Foreign Minister S.M. Krishna emerged from a meeting with Rajapaksa in January saying the president had promised to honor a 15-year-old amendment in the country’s constitution that would give limited autonomy to the Tamil-dominated north. No sooner had Krishna left the country than Rajapaksa denied having ever made such a commitment, to India’s fury.

Foreign Minister Peiris said the government was eager to implement the commission’s recommendations but not under “duress” from abroad.

But in Rajapaksa’s home constituency of Hambantota, a brand-new deep-sea port offers a clue to the government’s attitude. The port is just one of many infrastructure projects underway here that is being built and funded by the Chinese, and one that has deeply irked India’s government as an unwelcome Chinese intrusion into its Indian Ocean “back yard.”

Chinese weapons had been instrumental in helping the Sri Lankan government end the war. Now Chinese support is allowing the government to design its future.