All democratic organizations vehemently condemned the unlawful killing of political prisoner Nimalaruban, without any trial, at the Vauniya prison.  Everybody in the north as well as in the south understands that he and other prisoners were severely assaulted and beaten with iron rods by the police and others, while they were under the supervision of defence secretary. Post-mortem has become a mockery with the “Communist” Minister of Prisons jumping the verdict. My former comrade has done better than Beria. As highlighted previously on numerous occasions, in this column, Lankan political and military leadership continues to violate the basic human rights of the Tamil people in Lanka with total impunity. This state terror is now spreading in Sinhala areas too. Even after the recent UNHRC resolution and the subsequent assurances given by the Lankan delegations to the global powers, the real ground situation has not changed. Liberal organizations and such leaders claim that unless the international community takes a strong stand and isolates Lanka from international forums, there would not be any change in the human rights situation on the ground. They continuously and vehemently call upon the global powers to immediately condemn this kind of unlawful custodial killings and initiate diplomatic moves to expel Lanka from the Commonwealth. Now they request world powers to take up this unlawful killing at the forthcoming specific Human Rights Review session on Lanka, in Geneva. Unfortunately, Liberalism is impotent to day to go further than formal protest. So called liberal democracy is limited by the whims and fancies of the ruling elites of world powers. Mahinda follows the socio economics of world masters; hence is inevitably shielded by them. UN is incapable of positive action when America, India and others who yield power are to defend the villain. The Protest of the Opposition, Vipaksaye Virodhaya-VV- is the alternative left for those who are willing to do something positive against this villainy of the regime of madness. Terror of the regime of madness can strike you at any moment. It has threatened union leaders, media personnel, political opponents and critical artistes. It was in this background the VV meeting was held at Beruwala on July 6th. 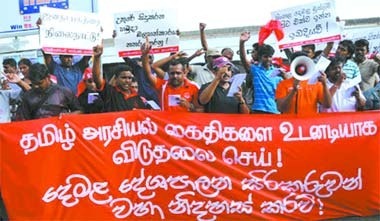 I was not emotionally attracted to green flags in the past. As an ardent Sama Samajist I used to feel that the green flag stood for rigidity and conservatism; that was the natural reaction. Even in the period of JVP Sinhala chauvinist terror, unleashed against all those who stood for equality and autonomy, when both the UNP and the USA (UNITED SOCIALIST ALLIANCE) were at the receiving end, there was no sympathy to green flags that I could remember. However as I proceeded towards Beruwala passing Payagala I came across green flags erected on both sides with other decorations, and posters along the road; and I felt relieved. True there were red flags too; here and there. But certainly I was relieved to see green flags in an area dominated by Raththaran Mallee. Later I recapitulated the whole thing; how could the green flags give me a sense of freedom and relief? Mahinda has created a situation of such misery and madness and the so called communists and Sama Samajists in the coalition have wagged their tails to the master in such an ugly manner, green has become a symbol of freedom. In a country where madness rules and sense is crushed with cruelty even conservatism could become a space for liberty. I do not classify Ranil as a conservative; certainly he can think and act, like a social democrat. That is good enough for us to collaborate in this struggle against the regime of madness.

The meeting was held in a large hall that could accommodate even three hundred. There were people outside who could hear and see what as happening. Ranil, Siri, Maname, and Soyza, participated; Mano could not come. Sumanthiran was busy with the campaign in the north, struggling to get the body of Nimalaruban out from the clutches of the state. Yusuf and Wijemanna, the provincial councillors who were with me in the WPC in 1990, were there as UNP organizers while the new UNP organizer was in the chair. Ranil requested me to be the last speaker as he had to leave early to attend to a family matter. In his speech Ranil insisted that the VV will stand for the struggle of the trade unions for higher wages. Demand for Rs 7500, seven thousand five hundred, salary increase for all workers is a must to counter the devaluation and inflation.

The government method of using court rulings to suppress trade union and civil activities should be countered both within parliament and outside. Plunder of provident fund money that belongs to the families of workers should be arrested by legal actions and trade union actions. Pressure must be exerted to make the government pay pensions to the peasants and the fishers. I was amazed to watch Ranil the UNP leader challenging on behalf of the proletariat, Mahinda – adamabara thaththa- the proud father of the masses! Meeting went on very well until I got up to speak when somebody seated in a front seat got up and started shouting. I could not understand what he said but certainly he was trying to stop me speaking. For those who were in the room I am a special guest in their town and naturally they reacted sharply. If not for the intervention of Ranil and other leaders he would have got a severe beating.