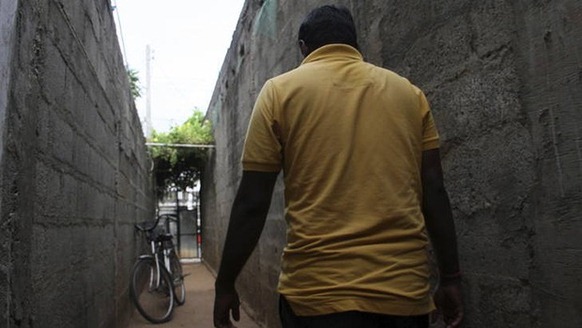 (smh) SRI Lankan asylum seekers rejected by Australia and sent home say they have been arrested, imprisoned without trial and tortured.

With about 150 Tamils in the Australian immigration detention system currently facing involuntary return to Sri Lanka, an investigation by The Age has uncovered alleged instances of people being sent back to systematic, state-sanctioned abuse.

Sinhalese brothers Sumith and Indika Balapuwaduge, who were sent back from Australia in 2009 after their asylum claims were rejected, both say they have been interrogated and tortured in police custody.

In one instance, Sumith was horrifically beaten in his home in front of his four-year-old son, his wife has told The Age.

For the past 23 months, the pair have been imprisoned, but they have not yet had a trial.

Another man, whom The Age has chosen not to identify because he fears reprisals, was returned to Sri Lanka after his boat was stopped from reaching Australian waters after direct intervention by then prime minister Kevin Rudd.

He was arrested at the airport in Sri Lanka and accused of being a member of the Tamil Tigers – a charge he denies.

He told The Age he was held for 55 days without charge and regularly assaulted. "They hung me upside down with ropes and put a pole behind my arms, then they hit me with batons,” the man, 29, said.

”They hung me upside down at 11am and they took me down at 3pm. They hung three of us up, but only two of us came down alive. The other man died."

At liberty now, he says he is still watched by police: "I am living in fear. Even in a new city, my life is like being in jail."

The Sri Lankan government and police deny all allegations of mistreatment.

There has been a surge in the number of asylum seekers leaving Sri Lanka for Australia this year. Many are seeking economic opportunity, while others are fleeing ethnic or political persecution.

More than 1500 Sri Lankan asylum seekers have reached Australian territory so far this year – up more than 700 per cent on the whole of last year.

About 700 others have been arrested in Sri Lanka on board, or about to board, boats bound for Australia, local police say.

In Australia, at least 150 Sri Lankans in the immigration detention system have lodged appeals for judicial review of their failed asylum claims.

If those reviews do not succeed, only ministerial discretion can prevent their deportation.

The Australian government said it does not return anyone whom Australia is obliged to protect under international law, but that all of those not owed protection would be sent home.

"The removal of failed Sri Lankan asylum seekers in those circumstances does not breach Australia’s international obligations," a spokesman for the Department of Foreign Affairs and Trade said.

A Sri Lankan police spokesman has denied all allegations of torture and mistreatment, saying the claims are politically motivated.

"These people are told to give a bad image of Sri Lanka, by the people smugglers who make money taking people across the ocean," Ajith Rohana said.

"They are told to pretend they are being ill treated and discriminated against. It is not true … [torture] does not happen."

But The Age’s findings accord with those of rights groups and the United Nations, which said in a recent report it was concerned by allegations of "widespread use of torture and other cruel, inhuman and degrading treatment of suspects".