Addressing a press conference in Vavuniyaa on Tuesday, the Tamil National Alliance (TNA) called for immediate release of all political prisoners who are held without any charges in the Sri Lankan prisons. Gajendrakumar Ponnambalam, representing the Tamil National Peoples Front (TNPF) said that the International Community, especially the countries that backed the internal LLRC mechanism of Colombo in the resolution passed at the UN Human Rights Council’s Sessions in Geneva earlier this year, are primarily responsible for the fate of the Tamil Prisoners of War and political prisoners. Those who attended the funeral of Nimalarooban, braving the threats posed by the Sri Lankan military and intelligence operatives, told TamilNet that the victim had sustained fatal injuries on his head. 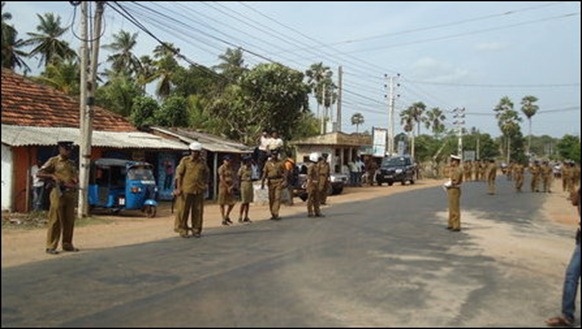 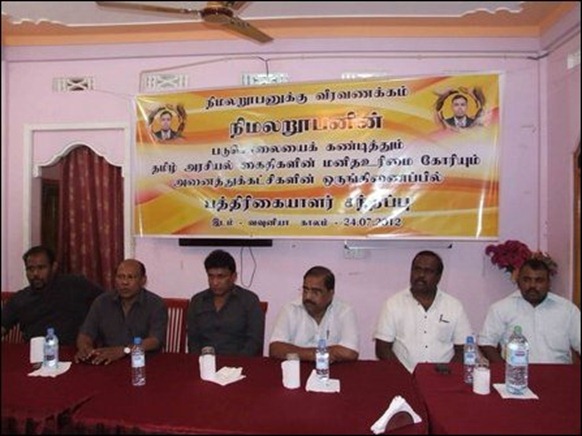 The slaying of Nimalarooban and the brutal assault of his fellow prisoners need to be perceived in a proper context, Mr Ponnambalam addressing the press at Vavuniyaa said.

Several politicians of political parties, including the TNA, TNPF in the North-East and the USP and DPF from South, came together at Taj Hotel in Vavuniyaa, criticizing the Sri Lankan state for incarceration without legal proceedings and torture, and the International Community for its inaction after having called for the surrender of LTTE fighters 3 years ago. TNA parliamentarian Suresh Premachandran presided the press conference. 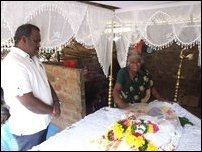 One should take note that the slaying of Nimalarooban, illustrating the pathetic plight of the political prisoners, has come after the resolution in Geneva passed in March 2012 that had sought the Sri Lankan state to conduct investigations confined to the internal justice of the Sri Lankan state, Gajendrakumar Ponnambalam said.

“The reality today is that the situation in Sri Lanka has deteriorated to a level where one cannot expect delivery of justice internally. There is no double opinion that the Tamil Nation has been denied of internal justice for more than 60 years. As far as Tamils are concerned, we have lost hope in expecting justice from internal mechanisms. However, today, those who disagree with the State even among the Sinhala Nation, are also being targeted,” the TNPF leader said. 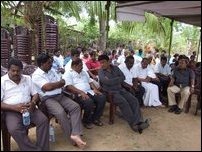 “So, at this juncture, the countries that passed the resolution in Geneva in March this year, expecting justice from an internal mechanism, should reconsider their stance,” Mr Ponnambalam said adding that if the IC failed in taking suitable actions, the situation would continue to deteriorate.

“Our stand is that it is the responsibility of the International Community to arrest the situation. Because, it was this same IC, that gave its full support to the war, proclaiming the LTTE as terrorists believing that the problem. They were providing support to the war expecting that the leaders in the Sinhala Nation would come forward to take constructive steps in resolving the ethnic question if the Tigers were removed from the picture under the label of terrorism,” he said.

“Now, even after the war was ended three years ago, the atrocities against Tamils are continuing. The responsibility of arresting the situation falls therefore on the IC,” Ponnambalam said.

On 29 June, Sri Lankan elite commandos of the notorious Special Task Force (STF) stormed the Vavuniyaa prison where Tamil Prisoners of War and political prisoners had taken three prison officers into their custody, demanding evidence of existence of one of their fellow prisoner who had been subjected to severe torture.

All the 122 prisoners who were inside the raided prison cell in Vavuniyaa were later taken to Anuradhapura prison, where Sinhala prison guards and criminal inmates tortured them for more than 10 hours. 22 of these Eezham Tamil POWs were then transferred to Mahara prison and Nimalarooban, hailing from a poverty-stricken family in Nelukku’lam, a suburb of Vavuniyaa, was one of them.

He succumbed to the fatal injuries caused during the torture at Mahara prison.

According to the family of the victim, he was arrested merely on allegations that he had been an LTTE member.

The family was struggling to access the body of the victim for burial. After a prolonged struggle the body was released with several conditions.

On Monday, SL military and police commandos were heavily deployed in Vavuniyaa. Threats were issued to close relatives of the victim not to attend the funeral.

Although the military presence was reduced on the funeral day, several people remained in houses fearing reprisals from the SL military and its intelligence squads.

Apart from politicians and journalists from the North-East and from the South, university students and representatives of the grassroots organizations attended the funeral which took place Tuesday evening.