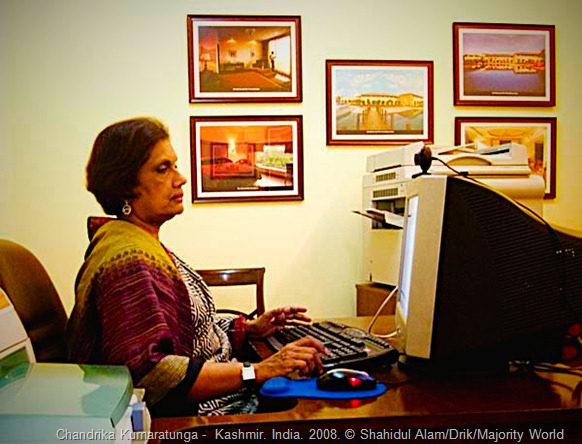 Former President Chandrika Bandaranaike Kumaratunga calls it “the first serious political interview I have given in six and a half years” referring to the interview she has given Sanjana Hattotuwa, editor of the website Groundviews.

The least important segments of the interview deal with the SLFP.  Her remarks are revelatory though. She states that she “can’t be bothered fighting with Mahinda for power in a Bandaranaike party”, thus reasserting that the party is a family property in her view; her only problem being which family it belongs to. Her hardly covert tilt to Opposition candidate Ranil Wickremesinghe in late 2005 also belies her affirmation at the tail-end of the interview that she pretty much presented the candidacy to Mahinda Rajapaksa on a platter when only three of 59 members of the SLFP’s top decision-making body supported it. “I gave it to him” is how CBK recalls it today with characteristic graciousness.

Far more significant are her considered views, enunciated with the benefit of hindsight, of the most important events and watersheds in our contemporary history: terrorism, the ending of the war and its aftermath.

Forget the lurid anti-Sri Lankan propaganda which places the death toll of Tamil civilians in the war at a ridiculous 40,000; a figure which has been disaggregated and challenged by respected civil society voices such as the MARGA Institute. President Kumaratunga has a very much higher figure than Channel 4 or even the shrillest elements of the Diaspora Tiger demonstrators. She talks of “hundreds of thousands”:

What is our former Commander-in-chief’s view of the last war and its origins? Is it the case that Prabhakaran was preparing for it and had only been deterred from its launch by the tsunami?  Was Human Rights Watch – no friend of the Sri Lankan state– accurate when it headlined its report just prior to the war’s outbreak as ‘Funding the Final War’, in which it detailed the LTTE’s global fund-raising surge, driven by the slogan that it was for the final conflict? Did the Sri Lankan armed forces, underequipped, depleted and demoralised by Ranil’s CFA, have to buy time and equipment to prepare for combat, in the face of the LTTE’s aggressive attacks on convoys and off-duty soldiers within weeks, if not days, of Mahinda Rajapaksa’s election? Certainly not according to our distinguished ‘student of history’, CBK, who names the Sri Lankan government and not the Tigers as the aggressor:

“…No, no, they just had some talks with the LTTE and the Government attacked some place or the other and they just broke the talks in a very flippant way.”

How does CBK rate the victory over the LTTE and the successful termination of the decades-long war, a termination which means that no one dies or is maimed by bomb-blasts which struck all parts of the country? How does President Kumaratunga assess the restoration of the territorial unity and integrity of Sri Lanka? Here’s her considered evaluation:

“This government has defeated and eliminated the external manifestation of the Tamil problem, of the Tamil people’s problem. They have eliminated the external manifestation of the continuing unresolved Tamil people’s problem of this country which was terrorism but they have not eliminated in any way the deep rooted causes of the Tamil problem which gave rise to terrorism. So in other words, they have eliminated –it is like when somebody is having a bad cold you sort of give a hankie and the person wipes the hotu (snot-DJ) and you think this cold is ok or you sort of like inhale some dung (steam-DJ) and even the sort of stuffiness in the nose goes so then you can’t even hear the person being a bit nasal so you think that everything is fine but you have done nothing to eliminate the germ in the body, the bacteria that has caused it”.

Now it may be the case that this statement of our former president may get up the nose of many of us since the ‘external manifestation’, the ‘snot’ or ‘stuffiness in the nose’ that she so derisively speaks of, caused the citizenry of Sri Lanka to lose loved ones and limbs, and to live in fear of the loss of their parents or children during any given day over a quarter century.

Her statement may strike one as snotty for another reason. If the crushing of the LTTE, liberating us from the curse of weekly suicide-bombings and enabling citizens to travel freely across the island once again were as easy and simple as lending a hankie to blow a nose, the question arises as to why President Kumaratunga did not do so during the decade she was the country’s leader and commander-in-chief. So, either it was a much bigger deal than blowing a nose and ridding us of a mere external manifestation, or it wasn’t. If it were the first case then Mahinda Rajapaksa did that which CBK couldn’t, and if were the second, CBK didn’t want to rid of us of the scourge of terrorism because it would have merely been a blowing of a collective nose and ridding it of snot; a task that was so superficial it was beneath her sublime capacities and noble destiny.

Mercifully we are provided with a glimpse of her thinking on this subject, in the course of the interview.  When asked by Sanjana Hattotuwa as to how she was changed by the LTTE suicide bomb which was meant to kill her but damaged her eyesight, she says that she became:

To be fair by Ms Kumaratunga and the historical record, her actual policy practice was far less absurd than this makes her sound. Having liberated Jaffna during her first term, in the year after the suicide bomb attack, she, together with Deputy Minister of Defence Anuruddha Ratwatte – and she above all others—resolutely resisted the LTTE’s offensive on Jaffna following the army’s retreat from Elephant Pass. She also sanctioned –albeit belatedly (going by Prof Rohan Gunaratne’s account)–the first LRRP ‘deep penetration’ operations behind LTTE lines, which were discontinued despite their success, by Prime Minister Wickremesinghe. That said, the statement I have quoted from her landmark interview provides the evidence of how confused her thinking on terrorism had been, how that confusion caused the vacillation and strategic incoherence prevented her from winning the war and how the absence of such confusion generated the policy cohesion that enabled her successor to do what she could not.

This serious strategic confusion carries over into President Kumaratunga’s perspective on post-war Sri Lanka. She says:

Now it should be obvious that there were other governments or ‘regimes’ with different policies while the war was on and that the Rajapaksa government was in office for only a fifth (20%) of the war’s total duration. No one but themselves prevented these governments, enlightened and ennobled as they were with “a different policy”—such as that of President Kumaratunga’s — from winning the war. Had it or its several predecessors performed this overwhelming historic duty, there may not have been an opening for a Rajapaksa government or it might have had a very different orientation.  If the “discourse” of the Rajapaksa administration is the reason that this problem is not “easily solved” as CBK says it can be, then it must be recognised that the regime’s policy, discourse and configuration are the default option of the vast majority of the citizen-electors following the failure of previous administrations and their respective policy discourses–not least that of the immediately preceding one, that of President Kumaratunga. Had she not failed in her fundamental duty of defeating the Tigers, she would have been able to put in place the policies she stood for and continues to commend.

She must reflect though, on the fact that even at the peak of her considerable popularity and a decade before “the state media” of the Rajapaksa government “washed the brains” of the Sinhalese – as she claims in her interview—she was unable to secure consent for her devolution ‘package’ of 1995 which remains, as she reaffirms to the interviewer, the best long-term solution (by her reckoning) to the Tamil people’s problem.

The most praiseworthy point in the interview is the assessment she makes of Tamil politics today and the constructive suggestions she puts forward for the Tamil Diaspora.

At the interview’s conclusion she reveals that: “Once again as a person who likes to hope, I see some glimmer of hope only, only [the word is repeated-DJ] because of the very vociferous interventions by the international community”.

Given the views she expresses here, it is little surprise and completely logical that President Kumaratunga does not repose her hope in the Sri Lankan society and people, their democratic traditions, or even in the party of which she is patron and her father was founder.