Retracting from statements following Shiv Shankar Menon’s recent visit, about holding Northern Provincial Council (PC) elections in September, Colombo plans to hold it in 2013 February to time an escape showcase at Geneva in March. The PC tactics of Colombo to hoodwink the world that Tamils are contented with the unitary model should have been countered by TNA actions on September this year’s Eastern PC elections itself. But they have decided to directly participate in it. They should at least now indicate in the manifesto the Tamil rejection of the unitary model, their aspirations for a combined North and East and solutions based on recognition of the nation of Tamils and its right to self-determination, for the people to vote with a cause and to tell the world of that cause, said civil activist Guruparan Kumaravadivel of Jaffna University’s Law Department, speaking to media on Monday. 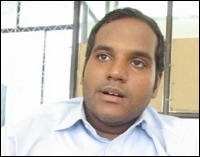 Earlier on Saturday, more than 100 prominent members of the civil movement in the North and East have come out with a statement of similar lines addressed to the TNA. Mr. Guruparan was one of its signatories.

Speaking to media, Guruparan said that the TNA leader Sampanthan speaking in Batticaloa recently had dropped the word Federal for the first time. Instead, he talked about a non-descriptive, non-unitary solution as the ultimate goal and 13-plus as a starting point. His differentiation between them is not clear. If the 13-plus is different from non-unitary, then the question comes whether the TNA has accepted to work within Colombo’s unitary constitution as the starting point. If the 13-plus is beyond unitary, then whether it is also the ultimate non-unitary goal, asked Guruparan.

Further summary of comments and observations made by Guruparan to media follows:

Our concern is that the TNA knowingly or unknowingly could become collaborators in leading Tamils into a trap harping on wordplays on the 13th Amendment.

In recent times, sections in the TNA try to discredit the civil society movement as sectarian and minority. But its significant growth could be seen in the numbers and wider representation in the current civil society statement.

In the aftermath of a silenced armed struggle, if any one says solutions would come through electoral politics alone, they are not honest, Guruparan said, pointing out to the primacy of a civil movement.

TNA doesn’t have a policy of coherence in denouncing LLRC-based solutions, due to pressure from India and the USA. It is sad that we don’t have a bold leadership of principled stand.

India and the USA could not go on telling for ever that the 13th Amendment is the base for a solution if Tamils are firm, clear and consistent in their denouncement.

Our engagement with the USA and India shouldn’t be a blank cheque but a critical engagement. The statements they make on guaranteeing state in the island are to pressurise Tamils to agree to their agenda. But we have to think from our point of view.

The election in the East is a good opportunity for the TNA to come out with a basic policy on the accommodation of Muslims and for a common working programme. They should have worked on it much earlier but even now it is not too late to clarify to the Muslim politicians and especially to the Muslim public that in what way they are different from the Sinhala polity, Guruparan said.

Welcoming the refreshing outlook of the Civil Society Movement and commenting on Guruparan’s views, another academic in Jaffna said that the international and local adversaries as well as detractors of the Tamil struggle know well that the Eezham Tamils at the moment have no alternative other than voting for the TNA in any elections. They make best use of the weakness to project distortions in the cause of Tamils, through the TNA, to suit their agenda. Tamils have to be prepared with alternatives as stand by.

Commenting on what Guruparan had said on Muslim-Christian contention over fishing in Mannaar, the academic commented that it is part of a larger conspiracy making all fishing communities on either side of the waters between Tamil Nadu and the island to be at war, for obvious reasons of ‘other plans’ in the waters, and the culprits could be easily identified. As industry and commerce minister, Rishard Badurdeen’s engagements with Indian investors and CEOs, was reported by Xinhua last week.

On building understanding between Tamils and Muslims, the academic commented that the Muslim leaders expect changes in Tamil outlook. Most of the expectations are confined to the model of ‘minorities’ coming together.

“India, International Community of Establishments and outfits of theirs such as the International Crisis Group etc also promote such a ‘minority’ outlook primarily to distort the national question, escape from appropriate solutions and to serve agendas such as a regime change if the current regime is not up to the mark in serving their interests.

“Sections of activists who have taken up the ICG-genre agenda also argue in the same lines that the Tamil-speaking peoples and Muslims are divided in the island, Tamils have failed in making the Muslims feel that they are part of the Tamil nation. Similar problems exist with the case of Up-Country Tamils of Indian origin. A large part of the Tamils today have gone away from the North and East. Therefore, there is a need for Eezham Tamils to restructure their cause.

“What is ostensibly forgotten is that the Eezham Tamils have a clear case of historical sovereignty, earned sovereignty and remedial sovereignty in the North and East of the island.

“The feeling of nation doesn’t simply come. It comes through a long historical legacy, geographical belongingness and above all through a legacy of struggle or war.

“When the Eezham Tamils have the evolution and need for such a feeling it should not be rejected. Similarly, if any people feel that they are minorities no body has the right to force them to merge into a nation.

“The success of Eezham Tamils and Tamil-speaking Muslims lies in finding an understanding about devising a secular, inclusive and alternative model for the affected country of North and East in the island. If the TNA is incapable, the civil society of Tamils and Muslims should start working on those lines,” said the academic commenting on Guruparan’s media briefing.