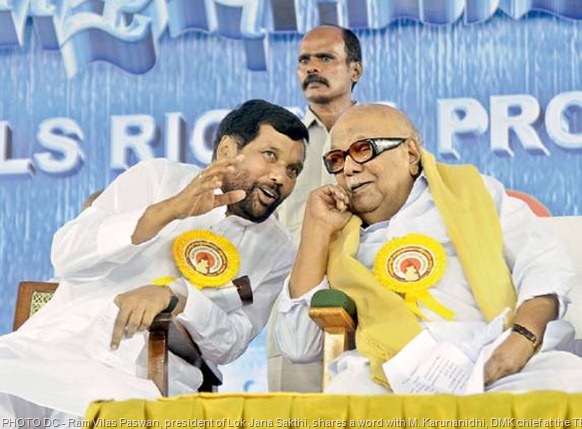 DMK president M. Karunanidhi on Sunday said he would seek to achieve his dream of Tamil Eelam with the help of like-minded parties in the future and his immediate ‘priority was to provide first
aid to the bleeding Tamils’.

“I am being asked why we are not demanding Tamil Eelam. I want to tell them that the objective of the conference is to provide first aid to the wound of the bleeding Tamils. Later with your support I will take up the struggle to achieve the dream of Tamil Eelam,” he said while addressing the Eelam Tamil Rights Protection Conference organised by Tamil Eelam Supporters Organisation (Teso) here at YMCA Ground.

While all the 14 resolutions adopted at the Teso conference desisted from raising Eelam issue, Mr Karunanidhi said he would achieve Eelam in the future with the help of others.

He pointed out the resolution adopted by the conference asking the Indian government to bring forth a resolution in the United Nations for bestowing full rights to the Tamils in Sri Lanka.

VCK president and MP Thol Thirumavalavan said that the solution to the Tamils issue could be achieved only through the formation of Tamil Eelam.

“To achieve this, we have to garner support of the international community for which the DMK has to take the lead,” The VCK president said.

Lok Janasakthi party founder Ram Vilas Paswan asked the DMK to hold Teso conference in North India to create awareness about the issue of Lankan Tamils. Paswan also urged the Centre to ensure safety of Tamils in the island nation and to initiate political process to reach a settlement.

After a two-day legal battle, the DMK has succeeded with the Madras high court permitting it to go ahead with the Tamil Eelam Supporters Organisation (Teso) conference as proposed at YMCA on Sunday with certain conditions.

A division bench comprising Justices Elipe Dharma Rao and M. Venugopal stayed the order of the joint commissioner of police, refusing permission to hold the Teso conference at YMCA and directed the commissioner of police to take all necessary steps to ensure smooth conduct of the conference so as to avoid any untoward incident in the locality in the best interest of the public.

The bench said the petitioner should ensure that at no point of time during, before and after the conference, the crowd in the ground was more than 8,000 people and not more than 250 vehicles were allowed into the ground.

The petitioner should also ensure that the sound emanated from the sound system, should not, in any manner, affect the in-patients of the Royapettah government hospital, the bench added.

The bench made it clear that the petitioner in all was responsible for the maintenance of law and order in the YMCA Ground and for this purpose, he shall extend all his co-operation to the police officials, to ensure public safety, security and tranquility.

The bench posted after four weeks, further hearing of the petition filed by DMK MLA J. Anbalagan.
The bench said the joint commissioner of police has not taken note of the fact that all arrangements have been made for the smooth running of the conference by the organisers. He has also not properly taken into consideration the fact that from 2010 to till date, the YMCA Ground has witnessed many functions/ seminars.

“When the Union Ministry of External Affairs and the Ministry of Home Affairs have given no objection for the conduct of the conference, we do not prima facie, see any reason to reject the permission sought for by the petitioner”, the bench added.

The bench further said, the Teso was not a banned organisation, so as to say that no meeting or conference at the instance of the petitioner can be permitted.