As a first hand written account of a diaspora Tamil who lived and worked for over four years in civilian institutions in the de facto state of the Eezham Tamils, N. Malathy’s “A fleeting moment in my country: The last years of the LTTE de-facto state” bears witness to how the sovereignty earned through the conduct of the struggle of the Eezham Tamils was denied by world powers, leading to the Mu’l’livaaykkaal massacre. A literature of ‘lived experience’ of one who stayed in Vanni for 4 years working with civilian institutions like NESoHR, women and child organizations, and later spending over 4 gruelling months in the Manik farm detention camps, the book should elicit interest not just from Tamils world over, but also academics, activists, feminists, journalists and those interested in studying social life under a political struggle against genocide.

‘Fleeting moment’ is published by US based Clarity Press, with a foreword from Indian academic and social justice activist Radha d’Souza.

Dedicated “for those who struggled”, the elegantly written book, in simple language, gives readers an idea of life in Vanni, positive social transformations happening under the de facto state, and their attempts to create an egalitarian society – points glossed over by other media reporting on the conflict.

While other writers who have picked on the Eezham Tamils’ issue after the Mu’l’livaaykkaal massacre have reduced it to one of minority rights, human rights abuses and war crimes of both sides, N. Malathy’s account of the de facto state of the Eezham Tamils and the brutal way in which it was crushed places the national liberation struggle of the Eezham Tamils in the context of global injustice that led to the May 2009 genocide. 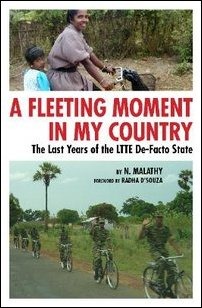 Speaking to TamilNet about her book, Ms. Malathy said "Struggle for justice invariably alters the base culture. So did the long Tamil Eelam struggle. Its crystallization was the Vanni society during the last years of LTTE. My four years experience in Vanni also gave me a unique opportunity to see firsthand the devastating truth about the ways of the powerful on this globe – about which I and many other Tamils have puzzled over for many years. For us Tamils of Tamil Eelam it is a new source of power through knowing. It is also our proud history."

In the foreword linking the content of Malathy’s book to trends in global injustice, Dr. d’Souza writes “The peace process prepared an international climate of opinion favourable to the military operation by discrediting the Tamil claim for the right to a homeland and by putting organised Tamil resistance on hold,” concluding that “As one of the most significant movements since the end of the Vietnam War the Tamil struggle merits deeper analysis.”

Staying in Vanni from March 2005 to March 2009 primarily involved in NESoHR, documenting atrocities against the Eezham Tamils and working with the Peace Secretariat, Malathy, a member of the Eezham Tamil Diaspora and a naturalised New Zealand citizen, also had experience working with destitute and war-affected children and reintegration of child soldiers into mainstream society through civilian institutions set-up in the de facto state of the LTTE.

Noting that one in 300 children had lost both parents in the Tamil homeland even in 2004, Malathy referred to how centres for destitute children were referred to as ‘children’s homes’ and not orphanages.

“The childcare provided in these child institutions, despite poor resources, was very impressive. I was impressed by the dedication of the caregivers. When these caregivers discussed individual children, they became emotional when talking about the child’s background and ecstatic when they listed the child’s achievements,” she writes, crediting the LTTE for bringing about a social transformation in Vanni where the care of those rendered without family by the Sri Lankan state’s war on the Tamils was taken on as a collective social responsibility.

While there was a near complete absence of child abuse in LTTE run children homes, in comparison to those in the rest of the island or the west, the author laments the reluctance of international agencies that criticized child soldiers to recognize the same.

Special attention was shown by Tigers’ administration for the smooth and efficient functioning of children homes for girls and boys, Chegnchoalai and Arivuchchoalai respectively, and the care they took not to involve children from these institutions in combat is explained.

The gap between trends in the UN on the ‘child soldier’ issue and the political culture on the ground is explained clearly in the book. Despite the obvious injustice in the Optional Protocol on Children in Armed Conflict of 2001 allowing states to recruit below the age of 18 while denying the same to ‘non-state actors’, and the treatment of the LTTE as the latter group, the Tigers, especially with the efforts of the then political head SP Thamilchelvan, went out of their way to reintegrate cadres below the specified age in normal society. This included, Malathy notes, punishments to LTTE members who flouted this rule.

Independence of NESoHR as a civilian body is shown to the reader through examples of the organization handled complaints against the LTTE and with the author also recalling a few practice-related differences of opinion between the LTTE and NESoHR.

A crucial issue mentioned in the book is the importance of documentation. The author notes that many of the statistical records and some vital reports on issues including demographic changes in the Tamil homeland have been lost in the course of Sri Lanka’s war on the Tamil people.

The author observes how even as early as 2004-2005, thousands of people participating in the ‘Pongkuthamizh’ events in Vanni urged the international community to heed their call for an sovereign state.

The patronizing attitude of peace-brokers, who would eventually tilt the balance in Sri Lanka’s favour, towards those in the de facto state’s civilian machinery is described in detail, with the author taking pains to note how SLMM’s, international media and organizations like HRW were keen to blow out of proportion flaws on the side of the LTTE.

The chapter ‘Women’s liberation Vanni-style’ should be of interest to scholars in gender studies in South Asia. While a trend in mainstream ‘feminist’ academic circles following the Radhika Coomaraswamy elitist coterie perceive of women in the LTTE as “cogs in the wheel”, Malathy tries to bring out a picture of them as active agents of social change, while also objectively looking at the extents and limits of LTTE’s challenge to patriarchal restrictions in Tamil society.

Women’s issues in Vanni, which was one of the areas that the author was interested in as she went to Vanni and the socio-psychological reasons for women joining the LTTE have been concisely explained. It is hoped that the author shall dwell on these topics with more details and examples in the near future for the benefit of interested readers.

Malathy also briefly highlights the evolution of societal institutions like IT education services, bookshops and libraries, fine arts, health care, disability services, judicial bodies, banking etc during the ceasefire period, showing how the de facto state was trying to create a normal society with humane living standards, even while managing a war affected population during a standoff against a genocide intending Sri Lankan state.

Narrating the horrors she heard and witnessed from the breakdown of the ceasefire to her internment in Sri Lankan army run Manik farm camps, including massacres and systematic abuses committed on Tamil civilians by the Sinhala army, Malathy also notes the involvement of world powers in the genocide of the Eezham Tamils, arguing that it was important to study the role of the West as regards the LTTE and the Eezham Tamils’ struggle for a sovereign state.

Criticizing western establishments and human rights organizations for lending credibility to a unitary Sri Lankan state even after it conducted an intended campaign of genocide, she writes: “Not long after the final collapse of the LTTE, the International Crisis Group charged that the violence may be reignited because the Tamil Diaspora had not given up the LTTE ideology. This was the charge against a transnational community that had just faced one of the gravest traumas of the century… In fact International Crisis Group has the stated policy of proactively disputing claims for an independent state in only two of the numerous such conflicts in the world. One of the two claims they are against is that of the Eelam Tamils and the other is that of the Kurds.”

Noting how the West denied the Earned Sovereignty of the Eezham Tamils by pursuing “an unbalanced policy of discrediting the LTTE, picking on every slippage in its conduct while ignoring the decades of Lankan government atrocities to which the LTTE was reacting”, she contends that Tamils need to grasp this interdependent global politico-military-economic sphere and its influence on their struggle.

A Tamil version of the book will be published by Vidiyal Pathippakam in Coimbatore, Tamil Nadu by the end of this year.