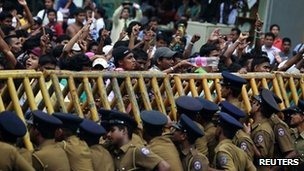 Sri Lanka’s government has closed down almost all universities for an indefinite period amid a row about the future of education in the island.

Academics have been on strike for nearly two months, accusing the government of interference and demanding more be spent on the sector.

The authorities say teachers are putting students in a position of "darkness, without any hope".

For decades, university campuses have been a source of turmoil in Sri Lanka.

Students’ problems helped trigger the Tamil insurgency as well as equally bloody Sinhalese insurrections in the 1970s and 80s.

Since early July academics have been on strike in Sri Lanka. They denounce government plans to partially privatise a tertiary education system that has always been state-funded and free.

They want an end to what they say is political meddling in campus life. They want much more spent on education overall and they are demanding a salary increase.

The government has now responded by closing down 13 of Sri Lanka’s 15 state-funded universities, apart from their medical faculties, with no indication of when they might reopen.

They have also accused academics of trying to topple the government.

"Their [the trade union’s] aim is to create instability and a political crisis leading to a regime change, we guess," higher education minister SB Dissanayake said.

The government says it has already agreed to five of the academics’ six main demands. But the spokesman for the academics’ main union, Mahim Mendis, told the BBC this simply wasn’t true.

He said that the "politicisation and militarisation" of universities must end. At the moment, he said, ministers were appointing their own loyalists to top university posts.

"To suggest we want regime change is frivolous. You need to understand, Futa [the union] includes academics from all political parties. This is a national struggle," he added.

He also denounced an edict compelling universities to use security companies run by the ministry of defence and he criticised a two-week programme of military-led training which all university entrants now have to undergo.