Former Special Envoy of the Tokyo Co-chair to the Peace Process between the SL government and the LTTE, Yasushi Akashi, visited Jaffna and Ki’linochchi on Friday to listen to the views of the religious leaders in Jaffna and to review the humanitarian assistance Japan has provided to the welfare of the resettling civilians and former combatants in Vanni. “Architects of the genocidal war cannot be mere listeners. They are answerable to the affected people and to the world. There is no foreign establishment involved in the island that doesn’t really know what is happening. Therefore, the boldness with which the grassroot aspirations of the nation of Eezham Tamils has to be politically translated in a befitting way should never be compromised in the island and in the diaspora,” said a social activist in Jaffna observing Mr Akashi’s visit. 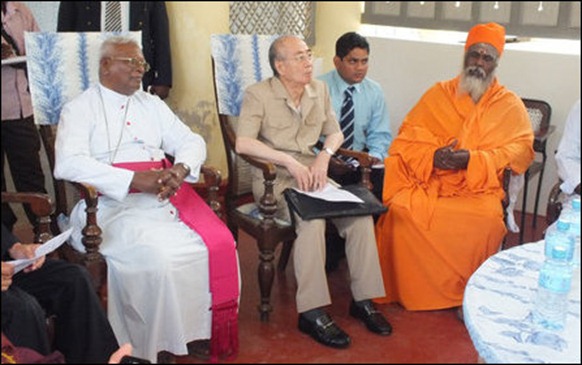 Mr Yasushi Akashi met Saiva, Catholic and Islamic religious leaders in Jaffna, who constitute a peace group named ‘Peoples Council For Peace And Goodwill’ (PCFPG), in which the prominent members were the Bishop of Jaffna, Rt. Rev. Dr. Thomas Savundaranayagam and former Vice Chancellor of the University of Jaffna, Prof. P. Balasundarampillai.

The group, customarily met by visiting foreign dignitaries, is led largely by a compromising shade of opinion, news sources in Jaffna commented.

Srilasri Somasundara Paramachariya Swamigal from Nallai Aatheenam, Rt. Rev. Thomas Savundaranayagam, the bishop of Jaffna, representatives of the Church of South India, and the Moulavi of Jaffna, representing the PCFPG were present in the meeting with Yasushi Akashi. 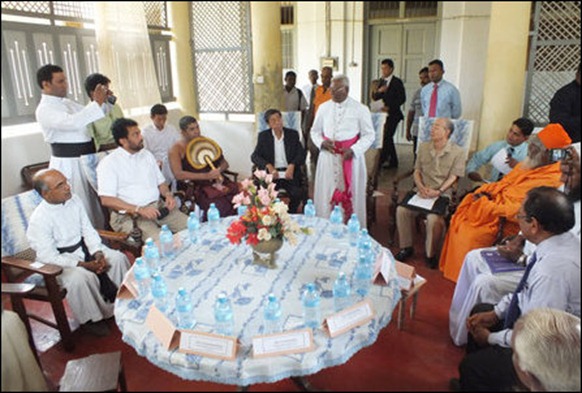 The Buddhist priest from Nagadipa vihara, situated at Aariyaku’lam junction in Jaffna, was also present at the meeting.

In a document submitted to the Japanese envoy, the group said: “There are reservations about the limited mandate and the composition of the [LLRC] Commission. However, the effective implementation of its salient recommendation is an utmost priority.”

During the meeting, the Tamil speaking religious representatives pointed out to the former peace envoy of Japan that the Government of Sri Lanka had failed in taking constructive steps in restoring the livelihood of resettling people. Colombo is still not prepared to resolve the political question, they said. 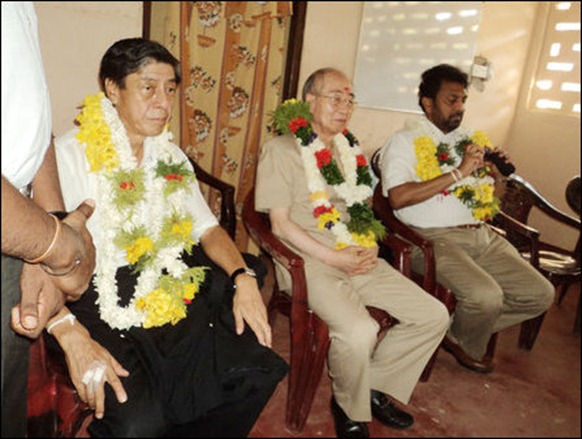 The High Security Zone still remains and the Prevention of Terrorism (PTA) is still used to deny the people their freedom of movement and freedom of expression, they said.

“Out of the 45 Village (GS) divisions, 28 are still within the HSZ. 31,524 people are are denied of resettlement in the ‘golden soil’ of Valikaamam North in Jaffna alone,” they said, handing over the document describing the situation of North as per 23 March 2012.

“Tamil speaking people are very much concerned with the erection of Buddha statues at every nook and corner in North East region giving the impression to the foreign visitors that majority in these areas are Buddhist. In reality, Hindus are in majority followed by Christians and Muslims. With passage of time, a move in this direction can pave way the way for a religious war,” the document said.

PDF: 23 March document of Peoples Council for Peace and Goodwill

“Language and religion are two nodal points that propagate the culture of any ethnic community,” it said describing the so-called Sinhala Only Act of 1956 as the foundation for the conflict and the war that followed.

At Ki’linochchi, Mr. Akashi meets a section of former LTTE female members who were subjected to so-called rehabilitation programme by the occupying SL military

Yasushi Akashi met some of the former LTTE members, including female cadres, during his visit to Ki’linochchi, where the International Organisation for Migration (IOM), had provided some assistance to the former combatants after their incarceration.

Sri Lankan military intelligence operatives were watching the ‘freedom of speech’ of the ex-LTTE members while Akashi was interacting with them.

The IOM has been widely alleged of collaborating with the SL military. The organisation, on the instructions from the SL Defence Ministry, has even taken back the identity papers it gave to former LTTE members certifying their release after the so-called rehabilitation programme by the SL military.

After showcasing Akashi’s ‘inspection’ of ex-LTTE members, the Japanese delegation visited Jayanthi Nakar to inspect how Japanese aid was utilized to help the resettling people in the suburb of Ki’linochchi, where the recipients of the assistance complained that the foreign aid given for resettlement had only reached to a small section of the affected people.

The people of Jayanthi Nakar urged Mr Akashi to not only provide more humanitarian assistance, but to also ensure that the assistance was reaching the affected people in a meaningful way.