Various newspapers  reported that NSSP leader Bahu was attacked at Dambulla, when he came to participate in the protest of the opposition                    – Vipakshaya Virodhaya (VV) on August 17. These claims stated that “people were protesting against his participation in the TESO meeting in Chennai; some members of the public abused him, while others threw eggs at him. Under terrible pressure, frightened Bahu cried for help and pleaded to Ranil for intervention. Ranil and the other leaders came there in time to rescue Bahu from this predicament. Otherwise Bahu who faced the wrath of the people would have at least ended up in hospital!”

A plan from the top? 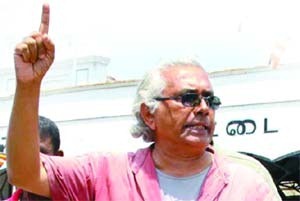 I read this fairy tale with  amusement. I wondered how this story was suddenly created and spread to so many media institutes. It has to be a plan from the top. Clearly this media creation is tied to another news item which said that I was interrupted while addressing the Chennai mass rally on August 12. This was highlighted by none other  President Mahinda himself. One news report said on August 16: “President Mahinda Rajapaksa said no one should be allowed to tarnish the unblemished image of the country in Sri Lanka or abroad by the patriotic people of this country. The aim of the Eelamists is to break the unity and trust among us and reduce the feeling for the country and make us criticize the motherland.”

The president said a leader of a political party who attended this pro-Eelam conference had similarly criticized the country. “However the same people who tried to set up Eelam here intervened to stop his speech,” the president said. President Rajapaksa said what this demonstrates is that although Eelam is welcome elsewhere they don’t want this to happen in this country. He said although Eelam could be established elsewhere, no country will want this to happen on their own soil. “On the other hand, patriotic Sri Lankans should not allow those criticizing their motherland abroad, or allow foreigners to criticize the country in their presence. We should not play into the hands of Eelamists,” the president said.”

I must say clearly that nobody interrupted my speech at Chennai and that the speech is available now in all three languages. Similarly, nobody threw eggs and disturbed me at Dambulla. I went to Dambulla around 3pm on August 17, 2012 to participate in VV – the protest of the opposition. I was greeted by the Dambulla UNP organizer Sanjeeva Kaviratne and a crowed of supporters. He requested me to start the protest campaign and by 4 pm, the protest became a mass affair with large number of people gathered to watch and support our slogan shouting with the display of posters. The campaign went on uninterrupted until Ranil arrived and started the rally. Arun Soysa opened the meeting getting on to the double cab that was organized for this purpose. In my speech, I ridiculed the government for getting pushed around by global masters. Ranil spoke last. The whole event was reported correctly by a main TV channel on the same day at 10pm and anyone interested can go tohttp://www.youtube.com/ watch?v=l0e5isKs1bc, and watch it.

Clearly, somebody wanted very badly to show the world at large, that Bahu was attacked for going to Chennai to participate in the TESO rally. It was vitally necessary for them to show that speaking against the Mahinda regime is unpatriotic, and hence people spontaneously reacted to the presence of Bahu at public events. In particular, it was necessary to show that in the first event I participated after the TESO rally.

The Dambulla VV was a mass protest. Hence, the so called attack was constructed carefully by a set of media creeps who could build fairy stories for any eventuality.