James Carville, a well-known U.S. political pundit, commenting on the contemporary relevance of a letter written in first century B.C. on "how to run a good campaign," says in a Foreign Policy article, "[l]ittle did I realize that pretty much everything I’ve said was old news 2,000 years ago, covered expertly in Quintus Tullius Cicero’s strategy memo for the campaign of his brother, Marcus, for consul in Rome in 64 bc." While the note applies more to, and highlights the hypocrisy inherent to, the political campaigns running up to the elections in the much celebrated western liberal democracies, campaigns in west-propped up, family-run, majoritarian, illiberal democracies such as the one in Sri Lanka, can add a chapter on the use of threat and violence to win elections to Cicero’s handbook. Tamil National Alliance’s campaign, in contrast, can be said to steal leaves out of Cicero. 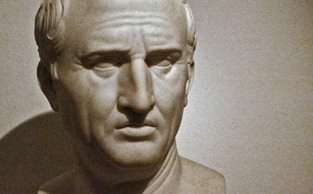 The words "Threat" or "Violence" do not appear in Marcus’ memo. The only threat Marcus advocates to his brother is the threat of taking the opponents to court for illegal actions such as bribery.

Marcus says, "It may well be that your opponents will try to use bribery to win your supporters from you, for this can often work. But let them know you will be watching their actions most carefully and you will haul them into court. They will be afraid of your attention and oratory, as well as the influence you have with the business community. You don’t have to actually bring your opponents to trial on corruption charges, just let them know you are willing to do so. Fear works even better than actual litigation."

Threats used by the Rajapakse family to swing voters in Eastern elections are of a different kind.

"The Sri Lanka Ministers escorted by UPFA gangs have been threatening the village level officers called GS officers to get signatures from Tamil voters that they would vote for the ruling party," early reports said.

"More than one thousand men sent under the instruction of SL Presidential sibling and Economic Development Minister Basil Rajapakse have been engaged in intimidating Tamils and Muslims in the three districts of the eastern province namely Ampaarai, Batticaloa and Trincomalee that they would face serious consequences if they fail to vote for the ruling United Peoples Freedom Party," another report said.

Tamil National Alliance (TNA) party leader Sampanthan wrote to Sri Lanka’s President complaining that [Colombo sponsored] ""Blue Brigade” have asked for the polling cards of voters, inspected the same, and warned them that they could face unpleasant consequences if they did not support the ruling party," according to Tamil media reports.

Voter-targetted violence by families holding power, intimidation with impunity and without accountability, and the "democratic" existence of a pliant, politicized, judicial system, would not have entered into the electioneering calculus of a first century BC intellectual, Tamil political observers noted.

On the other hand, deliberately inconsistent views and visions related to Tamils right to self-determination and sovereignty articulated by the leadership of the Tamil National Alliance (TNA), appearing to be in consonant with the advice of Cicero, have brought the TNA into conflict with the views of prominent civil society groups in the North.

"The most important part of your campaign is to bring hope to people and a feeling of goodwill toward you. On the other hand, you should not make specific pledges either to the Senate or the people. Stick to vague generalities… Assure the common people that you have always been on their side, both in your speeches and in your defense of their interests in court," says Cicero.

TNA leadership has also been accused of falling prey to the agenda of New Delhi and Washington to try to ‘rediscover’ unity of genocidal Sri Lanka through Colombo-centric ‘cosmopolitanism.’ While not raising issues related to popular Tamil aspirations during meetings with diplomats, TNA artfully uses popular Tamil nationalist rhetoric to win the confidence of the voters, Tamil political observers said.

"Promise anything," Cicero says, breaking the promise later will anger only a selected few, Cicero adds.

"Remember [the politician] Cotta, that master of campaigning, who said that he would promise everything to anyone, unless some clear obligation prevented him, but only lived up to those promises that benefited him. He seldom refused anyone, for he said that often a person he made a promise to would end up not needing him or that he himself would have more time available than he thought he would to help. . . . If you break a promise, the outcome is uncertain and the number of people affected is small. But if you refuse to make a promise, the result is certain and produces immediate anger in a larger number of voters. Most of those who ask for your help will never actually need it. Thus it is better to have a few people in the Forum disappointed when you let them down than have a mob outside your home when you refuse to promise them what they want," Cicero admonishes his brother.

Jaffna civil society activist Guruparan noted that "Sampanthan speaking in Batticaloa recently had dropped the word Federal for the first time. Instead, he talked about a non-descriptive, non-unitary solution as the ultimate goal and 13-plus as a starting point. His differentiation between them is not clear. If the 13-plus is different from non-unitary, then the question comes whether the TNA has accepted to work within Colombo’s unitary constitution as the starting point. If the 13-plus is beyond unitary, then whether it is also the ultimate non-unitary goal, asked Guruparan.