After seeing the behaviour of today’s establishments in the Commonwealth that was once known for its effective action against South Africa’s apartheid, and after seeing the Indian diplomat turned Commonwealth Secretary General Kamalesh Sharma stretching his position to uphold the genocidal state and regime in Sri Lanka, the gagged Eezham Tamil civil society activists in the island urged the International Human Rights Organizations to come out with an international civil society boycott of the Commonwealth Heads of Government Meet scheduled to take place in Sri Lanka in November 2013. They also urged understanding governments in Canada, Tamil Nadu state and elsewhere to lead the international civil society paradigm, and the international media to help such a paradigm. The diaspora should be awakened to new struggle strategies, they further urged. 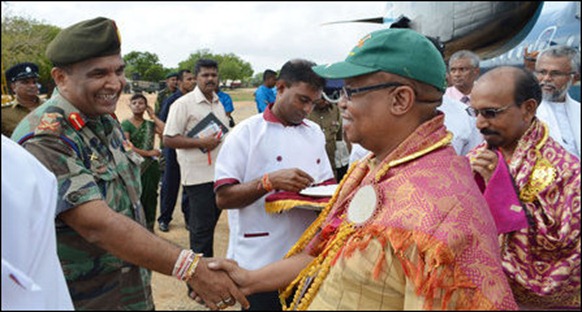 Canadian Prime Minister Stephen Harper’s stand is that he would not attend the meet unless Sri Lanka addresses the war crimes charges. During the CHOGM meet at Perth last year, Canada and Australia were vocal at Sri Lanka’s accountability issue and Canada opposed the Sri Lanka venue of the 2013 meet.

The crime of genocidal Sri Lanka is worse than that of apartheid South Africa. Apartheid South Africa’s white minority government never made 150,000 people to disappear in a single war, using prohibited weapons, as did by the Sinhala military of the majority-elected state in Sri Lanka.

Yet, the genocide, the continued structural genocide and the right to protection of Eezham Tamils of their nation and its territoriality are not recognised by the establishments of the world. The crime is reduced only to the level of ‘war crimes of both sides’.

Heinous efforts are undertaken from several sides to absolve Sri Lanka even from the truncated accountability. New Delhi being in the forefront of it has been repeatedly proved in the UNHRC sessions and at Perth last year. 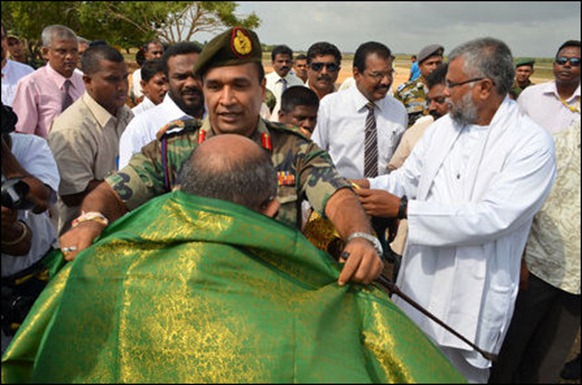 Jaffna commander of the occupying genocidal military, trailed behind by the SL minister and paramilitary leader Douglas Devananda, receives parliamentarians of the Commonwealth that once faught against the apartheid of South Africa. [Photo courtesy: Sri Lanka Army in Jaffna]

It is against this backdrop, the Indian diplomat turned Commonwealth Secretary General Kamalesh Sharma is seen stretching his position in discouraging voices in the Commonwealth that raise the issue of crimes-accused state in the island.

By completely ignoring the simmering situation of a genocide-affected nation in the island and by implying normalcy during his visit, the Commonwealth SG casts a profile worse than that of the UNSG and his staff including Vijay Nambiar, who were telling only half lies during the war, as in the case with the number of civilians trapped in the killing field, commented human rights workers in Jaffna.

A scrutiny of the statement by the Commonwealth on Thursday, on its SG’s visit to Sri Lanka would show that Kamalesh Sharma’s only offer specifically to the North and East, is a pilot project on “Sports for Development and Peace” in the North and East in partnership with Sri Lanka’s Department of Sports. Another general offer is training “Youth Ambassadors for Peace”, in collaboration with India’s Rajiv Gandhi National Institute of Youth Development.

Whether the Commonwealth SG, who earlier helped to rebuild independent East Timor, chooses to subtly ridicule the Tamil Nadu State that boycotts sports with Colombo and the nation of Eezham Tamils twice affected by Congress involved wars, or the Commonwealth in its affairs on Sri Lanka has been hijacked by New Delhi, is the question asked in Tamil political circles. 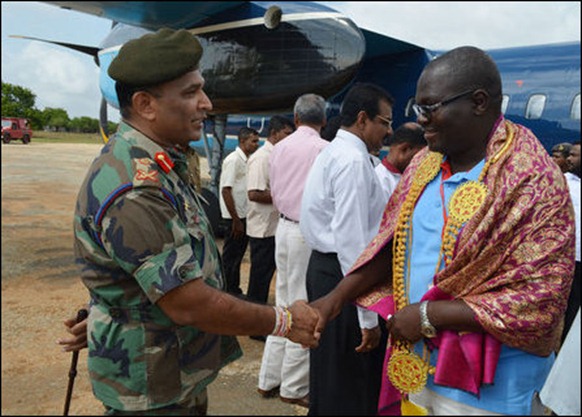 SL military is the authority to receive foreign dignitaries in occupied Jaffna. India sent the largest contingent of parliamentarians to the Colombo meet this week [Photo courtesy: Sri Lanka Army in Jaffna]

Civil society activists among Eezham Tamils appreciated and thanked the Assemblies of Tamil Nadu, Karnataka and Pondicheri for boycotting the Commonwealth Parliamentarians meet that takes place in Colombo now, ignoring the big show of over 800 participants from 53 countries and 175 branches, in which India had the largest contingent of 50 elected representatives.

Tamil Nadu government and political parties in unison have to seriously work on the civil society boycott and protest of the CHOGM meet, both inside of India and outside, the civil society activists urged. Even before the Perth meet, Tamil groups urged the Tamil Nadu government to think of an official external campaign against Sri Lanka, independent of New Delhi, at least in countries that have a Tamil diaspora.

A noted Indian academic Radha D’Souza recently said that “As one of the most significant movements since the end of the Vietnam War the Tamil struggle merits deeper analysis.”

But the establishments-orchestrated genocidal war on the liberation seeking Eezham Tamils has not invited enough international attention, says the very elements that kept the war and keep the war so, to excuse themselves.

On the contrary, pampering genocidal Sri Lanka is given unprecedented international highlight and attention, as in the insisting efforts of the culprits to hold the CHOGM in Sri Lanka.

“This will be the most prominent and by far the largest international event to be held in the country since the eradication of the three-decade long war against terrorism in 2009. It will also be a showcase event, which will not only project Sri Lanka as a safe and secure destination but also highlight its ability to hold international conferences of this magnitude and the availability of infrastructure and required resources,” said The Hindu, last Saturday.

“Your presence in Sri Lanka gives you a good opportunity to see for yourselves the progress of democracy in our country, after the major threat it faced under terrorism. This is important in the context of the barrage of lies being spread about Sri Lanka today […] You can now see the truth and return to your country with deeper understanding," said Mahinda Rajapaksa in inaugurating the Commonwealth parliamentarian’s meet.

The emerging truth is that to what extent the establishments of today and their organs could stretch their orchestrated engineering to absolve themselves from the crimes they have committed and continue to commit.

Unless the global civil society in unison admonishes, corrects and if not effective, disowns them, they would continue with their paradigm and would bring in violent crisis to the entire world, commented Tamil civil society activists.

Contrary to the adamant machinations of the so-called International Community, India and their protected partner in Colombo, the Eezham Tamils don’t want to see violence once again becoming the only option and this time it spreading into India, the Tamil civil society activists said. 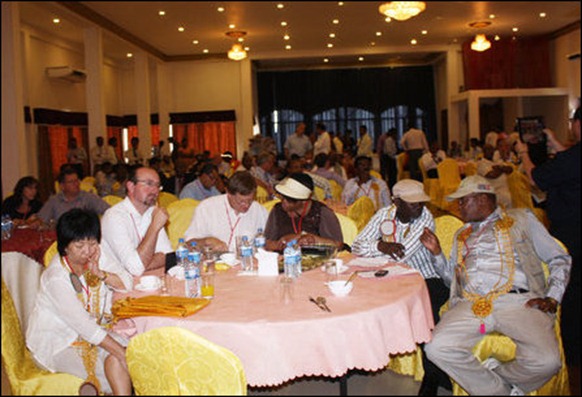 As a body of 54 English-speaking or English-knowing countries, the social power of the Commonwealth block in the contemporary world is extraordinarily significant.

While India manipulates to hijack it from inside, two powers outside of the Commonwealth, the USA and China, are also competing.

A threat that came from the Maldives last week that the tiny country that receives significant assistance from China may “look to other relationships that reflect modern realities of the world,” if it is not removed from the Commonwealth scrutiny of human rights, should be carefully noted by the civil society of the Commonwealth as well as the world.

If the prime ministers and presidents of the Commonwealth want to meet to endorse a genocidal state and regime in the island, without any care for values, let them do so. But the civil society should design a mechanism to tell in a powerful way that it denounces them.

Meanwhile, Canada and Australia are large countries in the English-speaking world to set the paradigm to save the values of the Commonwealth.

The international media should help the process and the role of Indian media is crucial in the particular case of Sri Lanka, which is also a test case for a global paradigm change, the Tamil civil activists said. 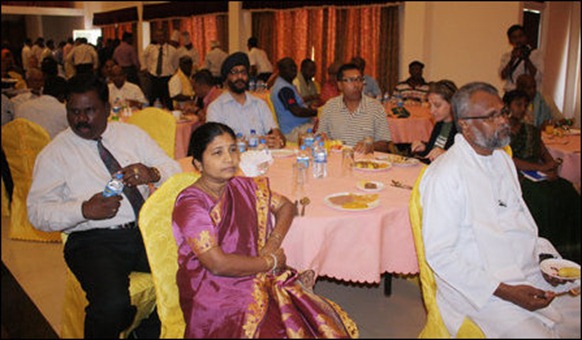 SL minister Douglas Devananda seeted in the front was the host of the commonwealth parliamentary delegates in Jaffna.

“As you will see, there is full freedom of travel to any part of the country. You can also speak to anyone, from government or the opposition and different communities,” Mahinda Rajapaksa came out with his habitual deception in addressing the parliamentarians.

The group that went to Jaffna was received by the occupying genocidal military’s commander in Jaffna, Maj. Gen. Hathurusinghe, had a guided programme to hear a lie from the officials that only 3,000 families are waiting to be resettled, and was later entertained by SL minister and paramilitary leader Douglas Devananda.

The SL Government Agent who very recently told media that 32,000 families had to be resettled in Jaffna alone, was silently watching when the lie on resettlement, amidst other lies, was told to the parliamentarians.

The group has not met the civil society, ex-LTTE cadres, social workers or any other sections that could have given them the true picture. Even though they are gagged, seeing their very faces could have told the truth, human rights workers in Jaffna said.

They might have seen for themselves the sharp contrast between the Swiss scheme having an understanding for the culture of Eezham Tamils and the monotonous, line-like housing scheme conceived by New Delhi, media circles that covered the visit commented.

The parliamentarians didn’t fail to amuse onlookers at the Nalloor Kanthasaami temple that has nowadays become a showcase for the occupying Sri Lanka that engages in genocidal destruction of temples and construction of Buddhist stupas in various parts of the country of Eezham Tamils.

All the parliamentarians who visited the temple broke coconuts in the name of the countries in the Commonwealth.

As coconuts are broken in a temple, usually for the success of what is in one’s mind or as a thanksgiving, the onlookers were joking at the ‘orchestrated intention’ of the Commonwealth countries in breaking coconuts at the temple.

The only ‘politicians’ the parliamentarians saw in Jaffna were the EPDP leader Douglas Devananda and his key operative Chandrakumar, who have hosted them at a hotel in Jaffna.

The very fact that the parliamentarians were received by the occupying military commander and were hosted by the SL minister accused in several international documents for his paramilitary activities should have conveyed the message to the parliamentarians that there is no normalcy, media circles that covered the events commented.

Civil society activists commenting on the unfolding scenario said that nowadays they don’t find much difference between Douglas Devananda and many of the articulating diaspora activists who are keeping the liberation struggle away from the masses and cling to the designs of the establishments, either because of their incapacity, gullibility or because of their self interest in political careers in the West.

It is time for the diaspora grassroot to remind the political articulators to change strategies to come out with mass civil society uprising to counter the orchestrated onslaught on Eezham Tamils by the establishments, the Eezham Tamil activists in the island further said. 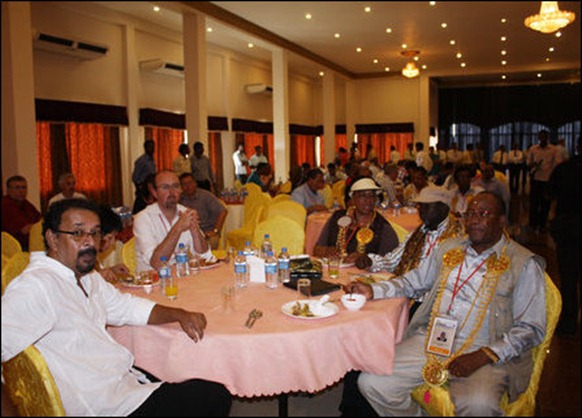