The voter turnout at the PC elections held on September 8, was less than 65 per cent, according to the Elections Department. Voter apathy prevailed mainly in Sinhala areas as the election was marked by an all-time low voter turnout in recent times. Only in the bogus election conducted under the facade of a referendum, that polling went down to such a low figure. Election observers in the East report that Tamils and Muslims voted enthusiastically, but even there, the turnout by the Sinhala had been lukewarm. However, election results for the Sabaragamuwa and North Central Provinces show a clean sweep for the UPFA. In fact their vote has gone up compared to the PC elections held in 2008. On the other hand, over 10 per cent of voters have kept away from this election and almost all of them could be counted as anti government voters. In all regions the UNP and the left were affected by this apathy displayed by the voters. In fact the political struggle has crept into the ranks of the government, as displayed by the competition for preferences. In many areas, the clash for preferences had taken a violent form. The government claims that this is a victory for their development programme. Obviously their infrastructure development programmes create temporary job opportunities and short-term market for some goods and services. Irrespective of any long-term benefits from these projects, local people may get attracted to the work that is being done. However, that cannot explain the lack of activity by the people in relation to the election. 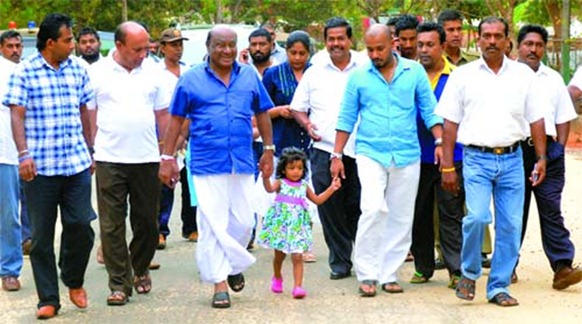 The government campaign was conducted smashing all election laws governing undue influence of voters. The elections commissioner had to conduct a mini civil war against the election machine of the Mahinda regime, even up to the day of the election. State power was misused to influence the voter by distribution of goods, jobs and services. The state owned media was monopolized, and others were pressed to fall in line. State terror was used abundantly. Even on the day of the election, a total of 64 election violence had been reported. The number includes seven incidents of assault and threat, 15 cases of pressurizing voters, two cases of trying to influence officials at polling booths, three instances of chasing away officials at polling booths, 30 cases of illegal publicity activities in and around polling booths, a case of transporting voters through the illegal use of state vehicles, and the biased and partial conduct of the police. According to the same report, opposition party representatives at the polling booths in Ratnapura in the Sabaragamuwa Province and Akkaraipattu in the Eastern Province had been chased away. It also stated that a few supporters of the SLMC had been assaulted at Akkaraipattu in the Ampara district in addition to similar attacks on JVP activists at Lahugala in the Polonnaruwa district.

We cannot accept this as a fair election. No way! In fact, this is an example of a fraudulent election, carried out by trampling the authority of the elections commissioner. Mahinda had shown the world how to misconduct an election when there is no independent election commission, when there is a dictatorial presidency empowered by the 18th Amendment.

People who abstained from voting gave the message to the opposition that lame, conservative electioneering is no answer to fight this corrupt regime. We are requested not to be mere actors playing the assigned roles in an election matrix of Mahinda, the master of trickery. It is true that the opposition is divided on political perspectives. That is to be expected.

But all those who oppose the chauvinist pro imperialist policies of Mahinda today, should be prepared to at least tread the path of Mahinda when he was the activist par excellence of the opposition. Vipaksaye Virodhaya, the protest of the opposition, had the correct idea. But it was too slow and less organized to meet the challenge. It should develop into a movement to mobilize all sections dissatisfied with the Mahinda regime.