Sri Lanka has been included in the the United Nations list of 16 nations singled out for cracking down on critics, the Washington Post reported. The UN report added that most of those countries’ governments are going unpunished for their acts of reprisal. U.N. High Commissioner for Human Rights Navi Pillay told a special session of the Human Rights Council that the 16 nations detailed in a new report “have been far from sufficient” in preventing members of their own governments from resorting to intimidation and attacks on various activists, the Post further said. 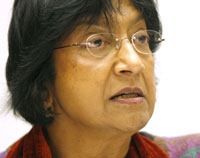 U.N. High Commissioner for Human Rights Navi Pillay told the UN Rights session, “Reprisals and intimidation against individuals continue to be reported. People may be threatened or harassed by government officials, including through public statements by high-level authorities. Associations and NGOs may see their activities monitored or restricted.

"Smear campaigns against those who cooperate with the U.N. may be organized. Threats may be made via phone calls, text messages or even direct contacts. People may also be arrested, beaten or tortured and even killed,” Washington Post quoted Navi Pillay as saying.

While urging the UN Rights Council and the world’s nations to do more to combat alleged cases of killings, beatings, torture, arrests, threats, harassment and smear campaigns against human rights defenders, Navi Pillay further said, “[w]e need more coherent and solid strategies to put an end to reprisals. Reprisals are not only unacceptable: they are also ineffective in the long term. Preventing people from expressing their will or their dissent freely, does not succeed. Ultimately, freedom will always prevail. And information will always find its way to the outside word."