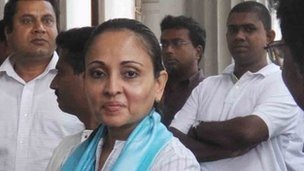 The editor of Sri Lanka’s most outspokenly anti-government newspaper says she has been dismissed after it was was bought by a businessman who wanted it to change its editorial line.

Frederica Jansz said that she left after refusing to curb her writing style or compromise her credibility.

The previous editor of the the Sunday Leader, Lasantha Wickrematunge, was assassinated three years ago.

His murder by four masked men on motorbikes has never been solved.

The Sunday Leader has always been controversial in a country where most media censor themselves.

Ms Jansz has been blunt in explaining her sudden departure.

She told the BBC that after an associate of the family of President Mahinda Rajapaksa bought a 72% stake in the paper, he asked her to stop carrying articles critical of the Rajapaksas – several of whom occupy senior government positions.

Ms Jansz said the new owner, Asanga Seneviratne, wanted her to "curb her style of writing and compromise her credibility".

She says that when she refused he terminated her contract.

It shot to fame towards the close of the war when Mr Wickrematunge was assassinated by men who have never been caught.

Last year Ms Jansz testified for the government against opposition politician Sarath Fonseka over a highly controversial interview which he gave.

In July, however, she openly accused the defence secretary, who is also the president’s brother, of launching an obscene tirade against her on the telephone.