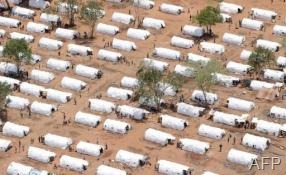 Sri Lanka’s President on Tuesday made his first visit to the village where troops defeated Tamil rebels three years ago as the authorities closed a camp which housed 300,000 war-displaced people.

Officials said Mahinda Rajapakse participated in a ceremony Tuesday to re-settle the last batch of displaced people at Wellamulliwaikal, the scene of the bloody finale to Sri Lanka’s drawn-out Tamil separatist war in May 2009.

"This is the first time the president visited the final battle ground," a military official told AFP. "He met with local residents and distributed essentials among IDPs (internally displaced people) being resettled."

The final group of 1,186 people from the Menik Farm IDP camp were from the same area where the top military leadership of the Liberation Tigers of Tamil Eelam (LTTE) was wiped out.

President Rajapakse made Tuesday’s visit to supervise the re-settlement efforts as well as officially connect the former war-zone to the national electricity grid, an official from his office said.

The United Nations welcomed the resettlement move, but said hundreds of people could not return home because their properties are occupied by the military in the former war zones. Instead they are in makeshift shelters or with friends and family.

Once one of the world’s biggest camps, the final batch of 361 families left Menik Farm in the northern district of Vavuniya on Monday, military spokesman Ruwan Wanigasekera said.

International rights groups described camps such as Menik Farm — the last to shut its doors — as internment facilities. They were strictly off-limits to journalists and private charities until recently.

In a statement, the UN said it was "concerned about 346 people who are returning from Menik Farm but were unable to return to their homes, which are occupied by the military.

"Instead, they are being relocated to state land, where they await formal confirmation about what is happening to their land in the future, and plans for compensation if they cannot return."

The UN chief in Colombo, Subinay Nandy, urged the Sri Lanka government to allow Tamils to settle anywhere they wanted.

"Allowing people to settle anywhere in the country and resolving legal ownership of land for those who have resettled away from their original homes is a key part of the reconciliation process," Nandy said.

He said the closure of Menik Farm was a "significant sign of the transition from conflict to sustainable peace", but noted that many people were still living with friends and relatives.

"Some of these people have been displaced for years and they also need a lasting solution," he added.

The Sri Lankan government said it spent $360 million to re-settle the war-affected civilians, with additional support provided by United Nations agencies and other donors.

Sri Lankan forces crushed the Tamil Tigers after decades of fighting in a campaign which sparked allegations that thousands of civilians had also been killed, a charge denied by the military.

The Tamil Tigers fought for an independent homeland for the island’s Tamil minority concentrated in the northern and eastern regions.