We went to Mullativu last week, and it was my first visit to this place. As we turned from the A9 road all indications were that we are entering a miserable area. The road was under construction and we had to move slowly. Fortunately it not raining, or we could have faced greater difficulties. I saw roughly assembled houses here and there. They were not even mud houses but assembled structures with tin foil to serve as a roof. We could see people struggling to survive. The army was everywhere and their presence was always felt. Our purpose was to protest about the displacement of the people from the village of Thepapilau. Villagers who wanted to go back and who were settled are being pushed out to make way to provide around 2500 acres to the armed forces. This is not an isolated incident. Such things happen regularly and we wanted to use this incident to highlight the issue of land grabbing and displacement of Tamils from their villages.

We arrived at Oddusudan around 8 am. At Oddusudan, I saw a well constructed army camp with all facilities. It stood out sharply within the cluster of sheds and clumsy huts. It is difficult for anybody to believe that the government has carried out its promise of rehabilitation and reconstruction. We rested for a while and moved to Mullativu by 10 am. There were some displaced people from the village that was taken over and those who answered our call who were waiting for us. As expected, police trucks arrived with anti riot gear. I thought all that was redundant when one compares it with the deployment of the army. Army officers were there in a big way with a large contingent of plain clothed persons. About half an hour later, the main organizer of the event, TNPF leader Gajendran Ponnambalam arrived, and all those who wanted to participate gathered opposite the AGA’s office. More and more people came and by the time Mano Ganesan and TNA MPs arrived the crowd had swelled to around 500. At 12 pm, as we were getting ready to start our protest and demonstration, SSP Janaka Gunathilaka came and started a pleasant discussion with me about the time scale of our protest! I could see that he was also in a trap in balancing armed power with the civil force. I told him that we did not come to challenge the government agent but to present our case to the available civil agent of the government, and our non-violent protest will last till 2 pm. He concurred, thanked me, and went. I thought ‘this is not as bad as I expected.’ I came to realize how wrong I was only later! 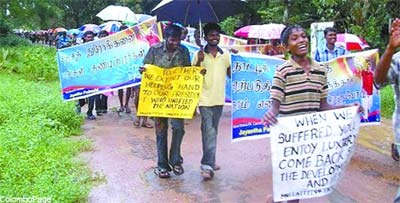 As soon as the TNA leaders came we started the protest with banners, placards and slogans. In the middle of our protest, suddenly from behind came a polythene bag filled with crude engine oil that landed on the ground before the protesters. Oil splashed around but no one was affected. Two plain clothed men who were suspected to be from the army ran away, and escaped, while no policemen dared to intervene. We continued unabated and finished the protest with a meeting addressed by all leaders who were present. Around 2 pm we dispersed for lunch which was arranged by TNPF. Just then, a dozen youth came to the place where we had the demonstration, and started shouting while displaying placards. Later I got to know that these placards had the message ‘Army will not leave Thepapilau,’ written in Tamil. Obviously that was a lame effort by the army to counter our successful protest.

Anyway this incident came as a ‘warning’ that the army will not let us go without more disruption. We therefore thought that we should travel together until we reached the A9 route. However, because of several organizational problems we could not carry out that plan, fully. The NSSP group left Mullativu in a van around 2.30 pm and we were moving slowly towards the A9 road. Mano went before us and Gajendran followed us in his vehicle. As the road was bad and still under construction we had to move slowly. On our way, we passed two military men on a parked motorcycle. As we passed them two men in plain clothes appeared from behind the bushes and started throwing stones at us. The first one hit the side mirror on the right hand side and the mirror broke into  pieces. Fortunately a truck came towards us and covered us from a second attack. The two men ran away while the uniformed men watched. Obviously these uniformed men have come to give cover to the new military operation of their colleagues! We drove off as fast as we could, away from this terrible place.

A few minutes later, Gajendran informed us that they were also attacked and their windscreen was damaged. Even the police agreed that these attacks could have been done only by the army because there are no other terror units in that area which could engage in such activities.

We should be grateful to the army of Rajapaksa for not resorting to shooting or abduction, and instead allowing us to get away with lesser attacks by crude oil and stones!