TNA parliamentarian Suresh Premachandran says an agreement on a political solution could not be reached in a multi-lateral forum like the proposed parliamentary select committee (PSC) when an agreement cannot be reached at bi-lateral level. Referring to the invitation by the Indian government to the TNA for a discussion, Premachandran observed that if the party did participate in the PSC would there be a guarantee of a final political settlement. “What we say is that there needs to be a guarantee of an outcome. If the Indian government could convince the government and the political parties to reach a political solution, the TNA could participate in talks,” he said.
Following are excerpts of the interview: 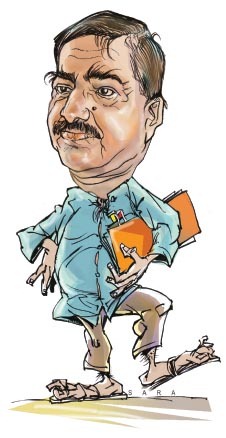 Q: The President, during his recent visit to India, called on the Indian government to help get the TNA involved in the reconciliation process. How will the TNA approach this issue with India?
A: First of all, we do not know what the government or the President refers to as reconciliation. There are 200,000 cadres in the military, which is around 20 divisions. There are 15 divisions placed in the North, which amounts to around 150,000 military personnel. The districts of Vavuniya, Mannar, Jaffna, Mullaitivu and Kilinochchi in the North are under military occupation. They are occupying an enormous amount of private lands. Thousands of people cannot go back to their own lands as a result in the North and East. In this scenario, we would like to know what is meant by saying reconciliation. Constructing roads and culverts alone cannot be considered reconciliation. There needs to be a proper political settlement and people must be allowed to look after themselves if we are speaking of reconciliation. There should be a free and democratic situation where everyone can express their views. The military will not even allow people to hold agitations in the North. An agitation that was organized in Mullaitivu last week was attacked by the military. The agitation could not be held as planned due to this situation. All these acts are carried out by the military. How could one expect reconciliation in such a scenario? When the government talks of reconciliation the government has not taken any proper steps towards it.

Q: Leader of the House Minister Nimal Siripala de Silva has blamed the TNA for the delay in commencing work on the proposed parliamentary select committee (PSC). Do you agree?
A: No. There is already an agreement between the President and Sampanthan. The agreement is to reach a consensus on substantial matters in bi-lateral talks. These agreements need to be taken before the PSC by the government and reach a settlement with all political parties. We are not against the PSC, but we feel that there’s no point in going for a meeting and returning. The government however has declined bi-lateral talks and has instead asked the TNA to go before the PSC and start a new dialogue. There have been so many committees that have presented reports with proposals on a political solution. Therefore, we feel this (PSC) is yet another delaying tactic. The first was the Mangala Moonasinghe committee, of which I too was a member. We met for three years and the report is now in the parliament library and no one even looks at it. After President Mahinda Rajapaksa assumed office, an expert committee and an All Party Representatives Committee (APRC) were appointed to propose a solution. A dialogue was initiated with the TNA afterwards and it stalled in January this year. The question is how one could expect a solution in a multi-lateral forum when an agreement cannot be reached at a bi-lateral forum. The PSC is a multi-lateral forum where hardliners in the government would also be present and it would have an impact on the progress of the committee. Since the government is not willing to come to an agreement with the TNA in a bi-lateral dialogue, it is difficult for the party to participate in the PSC.

Q: Will the TNA give into Indian pressure to participate in the PSC?
A: The TNA has already explained the current situation to the Indian High Commission, the all party parliamentary group from India that visited the country a few months back and the Indian Foreign Minister. If the Indian government wants us to take part in the PSC, there must be a guarantee of an agreement that could be reached at the end of the process. What we say is that there needs to be a guarantee of an outcome. If the Indian government could convince the government and the political parties to reach a political solution, the TNA could participate in talks. There would otherwise be no use in participating in the PSC.

Q: What is the TNA looking at in a reconciliation process?
A: We have clearly told the government of a comprehensive proposal to resolve the issue. There have also been various proposals by former President Chandrika Bandaranaike Kumaratunga, the experts committee and the APRC. There are various proposals on the table which we are willing to discuss. However, it should also be noted that most of the proposals for a political solution have been presented by SLFP governments. Kumaratunga even submitted a proposal to parliament in 2000. We will be happy with a federal system in the country where adequate powers would be devolved to the Tamil unit creating an autonomous rule in the North and East. The struggle earlier was for a separate state, but now we are all looking at a solution in a united Sri Lanka. If the government is willing, we could reach a settlement.

Q: You have criticized the government’s statement that the Menik Farm camp has been closed and the IDPs have been resettled. Why do you say the resettlement issue has not been solved?
A: I am dissatisfied with the resettlement programme. There are over 47,000 people who have registered their names to return to their homes. They are still living in camps and with friends and relatives. They have no land to return to. There are also over 7,000 displaced persons from Sampur in the East. They have been in four camps for the past six years. The displaced people who were in the Wanni have been taken back to Mullaitivu. These people were to return to Manduvil, but the area is still under the army. These people have been resettled in another area and are still living under trees. They do not even have a place to sleep at night. The government is trying to show the world that the resettlement of IDPs has been concluded and there no refugees in the country, but in reality people have been shifted from one camp to another. There are IDPs still in Jaffna, Mullaitivu and the East and that is a fact. The government, when questioned during the bi-lateral talks, said that de-mining was delaying resettlement.
The government has taken a huge amount of land for military purposes. I do not think the army needs so much of land in the Northern Province. I do not know why there are so many military personnel in the north since it can be reduced.  The government must try to take action and build faith among the people in the North at least by sending them back to their homes. When the government speaks of reconciliation, they should first build confidence among the people. The displaced people cannot do anything if they are sent back to a new forest.
What the displaced people say is that they could start rebuilding their lives if they are sent back to their hometowns. The international community must take note of these facts and call for action from the government.