(By Matthew Russell Lee) It was on the final day of the week-long UN General Debate that Sri Lanka’s G.L. Peiris spoke, along with North Korea, Belarus and Syria.

Like these other three, Sri Lanka spoke out against any outside interference in its internal affairs. Unlike Syria, however, Sri Lanka has largely prevailed in this request. No one has been held accountable for the killing of civilians in 2009. Peiris bragged about redeveloping northern Sri Lanka, without saying who is benefiting.

In the afternoon, before North Korea spoke, Inner City Press waited and attended the photo op between UN Secretary General Ban Ki-moon and Peiris. Beyond UN Photo, the only other photographers present were both affiliated with the Sri Lankan government.

Visible was Permanent Representative Palitha Kohona and other Mission staff, but not his Deputy, general Shavendra Silva of whose presence on the UN Senior Advisory Group on Peacekeeping Operations Ban on February 8, 2012 told Inner City Press, "it was the member states that decided." 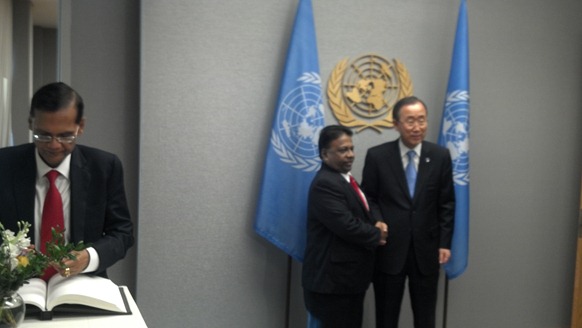 After the October 1 meeting Ban issued a bland read-out:

"The Secretary-General met with H.E. Mr. G. L. Peiris, Minister for External Affairs of the Democratic Socialist Republic of Sri Lanka. They exchanged views on the post-conflict situation in Sri Lanka and cooperation with the United Nations.

"The Secretary-General noted the Government’s latest efforts to implement the recommendations of its Lessons Learnt and Reconciliation Commission as well as the steady progress and remaining tasks on resettlement efforts in the North. He also emphasized the need to find a political solution without further delay to the underlying factors of the past conflict."

So when is the report by Charles Petrie, about the UN’s own inaction in 2008 and 2009, going to be finished — that is, released to the public? Was the crackdown on journalists, including the disappearing of Prageeth Ehaliyagoda, raised by Ban Ki-moon?

Is it difficult to know: Ban held a so-called "press encounter" on Monday, but no questions were allowed. On Tuesday, the UN Secretariat’s description of the week will be given by Ban’s new Deputy Jan Eliasson at 11:15 am.

And late on Monday in what some called garbage time it was announced that "Due to the press conference tomorrow by the UN Deputy Secretary-General, there will be no noon briefing by the Spokesperson."