Even as Erik Solheim tried to sell stories that the LTTE leadership was responsible for the Mu’l’livaaykkaal massacre at the book launch event of Frances Harrison’s ‘Still Counting the Dead’ at London on Friday, solidarity activists and members from Eezham Tamil diaspora in the audience criticized his role as a failed peace-broker and the unjust role of the UN and the International Community of Establishments in leading to the genocidal massacre of the Eezham Tamils in May 2009. Ms. Harrison’s book, which presents the different types of atrocities that the Eezham Tamils endured at the hands of the Sri Lankan forces through case histories, also had some insights on the silence of world powers as the Sri Lankan government carried its onslaught on the Eezham Tamils. 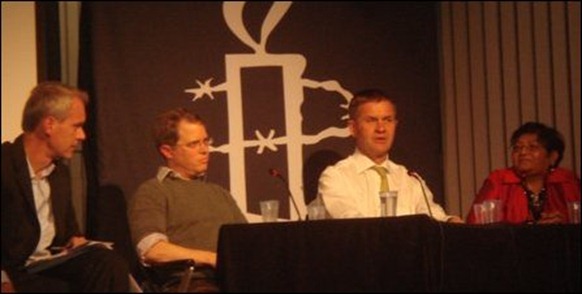 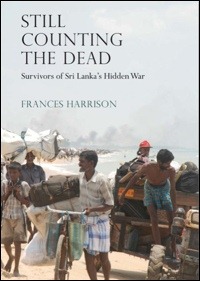 Frances Harrison, former BBC correspondent who reported on the conflict in the island from Colombo during the years 2000 to 2004, based her book on personal testimonies of survivors of Sri Lanka’s war on the Tamil people.

The book release was accompanied by a panel discussion with Norwegian politician Erik Solheim, who acted as mediator of the failed peace process between the LTTE and the GoSL, Alan Keenan, ICG’s Sri Lanka Project Director, and Yasmin Sooka, from the UN panel of experts who had compiled the UN report on war crimes in Sri Lanka, which was moderated by Stephen Sackur, BBC’s Hard Talk presenter.

Ms. Sooka was of the opinion that the figure of 40,000 Tamil civilians dead that the UN panel of reports arrived at was likely to be higher, at around 75,000. Sooka further said that the GoSL was yet to provide a list of detainees.

Mr. Keenan, referring to the Mannar Bishop’s figure of more than 146,000 disappeared at the end of the war, said that this number might be an ‘exaggeration’, claiming that 50,000 – 70,000 was the likely number of the disappeared. 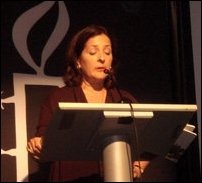 When Ms. Sooka said that the panel of experts was not allowed to enter Sri Lanka, a question was posed by the moderator why Ban Ki-moon, the UN Secretary-General was unable to compel Sri Lanka to allow this. To this, Ms. Sooka’s response was that Sri Lanka was a sovereign country. Mr. Sackur also questioned the relevance of the International Criminal Court, that hauled up those responsible for riots leading to the death of about 1500 people in Kenya, but did nothing in the case of Sri Lanka.

Erik Solheim put forth the argument that if the LTTE had agreed to an organized surrender the international powers would have prevented the massacre that had followed.

Throughout the event, Mr. Solheim took care to highlight that a major portion of the blame for Mu’l’livaaykkaal lay on the LTTE leadership. This was sharply contested in the Q and A session by many in the audience.

He further said that the diaspora should be working with the TNA, taking the latter as the leadership, and that Tamil aspirations for ‘self-government’ in Sri Lanka would get support in the IC. Alan Keenan also expressed similar opinions on the diaspora engaging with TNA.

Sasithar Maheswaran, an Eezham Tamil youth activist in the UK, referring to inconsistencies in Solheim’s arguments, questioned the credibility of the logic behind this so called ‘organized surrender’. He asked the Norwegian politician if this plan was applicable in January 2009, when the latter had claimed that world powers and India would have compelled the GoSL to treat the surrender, why couldn’t the same materialize in May or June 2009.

Many in the audience alleged that Solheim was evading answers to pertinent questions.

Mr. Rajamanoharan, an Eezham Tamil activist in UK, questioned whether Solheim was working for India. Tamil Nadu activist Srinivasa Rao accused that what India wanted to do in 1987, Solheim had facilitated in 2009.

Academics Amanda Latimer and Dr. Radha D’Souza raised questions on the UK and India providing arms and other help to the genocide-accused Sri Lankan government.

Callum Macrae from Channel 4, Benjamin Dix, a British aid worker who was working with the UN in the Tamil homeland till the UN agencies pulled out in September 2008, and Christine Bacon, a theatre activist, also spoke at the event.