Mr V. Sivasupramaniam, teacher, educational administrator, trade unionist and social worker, passed away in Seychelles on Wednesday, at the age of 81. His funeral takes place on Friday. Mr. Sivasupramaniam taught at Jaffna Hindu College between 1953 and 1972. Besides his reputation as an eminent, committed and inspiring teacher, he was also a leading trade unionist, long associated with the Northern Province Teachers Association that was the predominant teachers union of the region at that time. Later, the newly independent Seychelles government was benefitted by his services in developing educational infrastructure and institutions there. Serving Seychelles for nearly quarter a century, Mr. Sivasupramaniam was also a key person in building a cultural centre, a temple, for the South Asian Hindu community there. 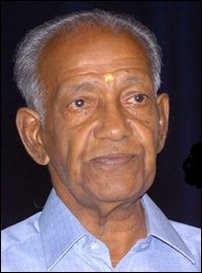 Mr and Mrs Sivasupramaniam were planning to wind up their long stay in the Seychelles, but providence decided his demise there, in the land of his high-watermark achievements.

Studied under the Jaffna Youth Congress generation of teachers, and was inclined to socialist ideology, he was an example of the old generation of committed educationalists who served humanity wherever they went.

Born at Aiyanaar Koayiladi in Jaffna in 1931, Mr Sivasupramaniam studied at Jaffna Hindu College in the 1940s. After graduating from the University of Ceylon, he was teaching Civics and Politics as well as English at the same college. He was also a leading figure in directing the Scouts movement of the college.

After 1972, he was principal at various schools, including A’laveddi Arunodaya College. He also served in Nigeria for sometime before going to Seychelles.

In 2010, on his 80th birth year, he brought out an inspiring book "Souvenir 80 – My Educational Memories," in which he remembered 218 educationalists of his times in the island.