A seven member delegation from the Tamil National Alliance (TNA) was expected to arrive in the island last night after a three day visit in India. New Delhi gave the go ahead for the visit, after it intervened to broker a deal to resume the dialogue between the government in Colombo and the TNA. Earlier this year, the government suspended bilateral talks with the TNA until the TNA joins the Parliamentary Select Committee (PSC) set up by President Mahinda Rajapaksa to ‘explore a political solution.’  The TNA, on its part, refused to participate in the PSC, citing the government’s refusal to hold bilateral talks with the party. Therefore it was ‘egg or chicken’ dilemma for the Indians as they sought to resume the stalled dialogue. 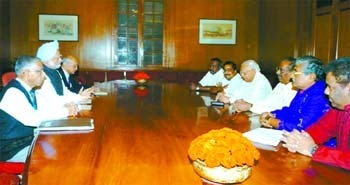 The Indian solution was that the TNA participates in the PSC, while the government simultaneously holds bilateral talks with the TNA. This position was initially agreed when President Mahinda Rajapaksa met Indian Prime Minister Manmohan Singh during his tour to Madya Pradesh last month to attend a foundation laying ceremony of a Buddhist institution in Sanchi . This agreement was communicated to the TNA before they embarked on the Indian visit and was reemphasized during an hour long meeting with India External Affairs Minister S.M. Krishna.

At the meeting with Minister Krishna, the TNA leadership gave their concurrence to the Indian brokered solution.

After the meeting, R. Sampanthan, the leader of the TNA delegation announced its position to reporters: “If the PSC has the intention of thrashing out a solution and has an agenda, we are ready to consider it. But, we are not ready to get cheated again.”

Later, during the visit, the TNA delegation met Indian Prime Minister Manmohan Singh. Mr. Sampanthan described the meeting with Prime Minister Singh as ‘good.’ “The prime minister said India would never backtrack from its position that the Tamils in Sri Lanka should lead a life of dignity and self respect in a peaceful environment. He told us that India is fully with the Sri Lankan Tamils and would continue to engage with the TNA,” Sampanthan said.

The Indian compromise is likely to end the stalemate in the dialogue between the government and the TNA.  However, the acid test would be to bridge the gap between the positions of the government and the TNA, of which stance over the devolution of powers was articulated in their proposals handed over to the government, last year. In the proposals, the TNA has been asking for maximum devolution of powers to provinces and transfer of ‘extensive financial and fiscal powers’ to the provinces including land and police powers. The government had rejected those proposals as ‘unacceptable,’ even before the bilateral talks came to an end.

The case will be taken up before a Supreme Court Bench comprising Chief Justice Shirani Bandaranayake and Justices K. Sripavan and Chandra Ekanayake.

The Court of Appeal referred the matter to the Supreme Court seeking an interpretation as to whether the expression of the views of the Provincial Council includes the expression of the view of the governor when a Provincial Council is dissolved. Justice S. Sriskanda- rajah, Court of Appeal president also sought a determination by the Supreme Court whether a question determining this fact falls under Article 124 of the Constitution.