Economic Development Minister Basil Rajapaksa says that the proposed Divi Neguma Bill that has now run into much controversy, is aimed at uplifting the living standards of the low income earners that amount to around 1.5-1.8 million in the country while also providing benefits to the 27,000 Samurdhi employees. Responding to concerns raised over the concentration of power with the Economic Development Minister, he explained that the minister is responsible to the people and has to answer to parliament and therefore, responsibility and power has to be with one individual. “There are so many new theories because a Rajapaksa is proposing this legislation,” Rajapaksa said.

Excerpts of the interview: 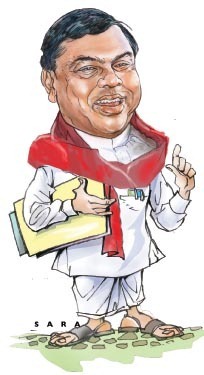 Q: How will the Divi Neguma Bill benefit the people?

A: The Divi Neguma Bill is targeting an identified group of people. They are the ones living under the poverty line. The Census and Statistics Department conducts a monthly survey to determine how much is needed by a family. There are currently between 1.5-1.8 million people living under the poverty line. They are the low-income earners. There have been a lot of programmes implemented to address issues faced by this group of people around the world. The most successful programme in Sri Lanka was Samurdhi. Strengthening community-based organizations is one way of assisting people in low-income groups. The Divi Neguma Bill is aimed at strengthening these community-based organizations to uplift the living standards of the low-income earners. There’s current a chain of community based organizations starting from the grass root level to regional levels. One of the main features in these organizations is the source of finance. People who cannot find assistance through the traditional methods usually resort to borrowings with high interest. On the other hand, micro-financing systems allows low-income earners to save and get finances when required. Such a system would also inculcate the savings habit amongst people who are sued to receiving a seasonal income like farmers, fishermen, etc. It would also introduce the low-income earners into the banking system.

Therefore, the Divi Neguma Bill addresses three main areas – strengthening community-based organizations, strengthen micro financing and set up a department to facilitate and monitor the entire process. Also, there are 27,000 employees currently at the Samurdhi Authority and these people have worked tirelessly to make the programme a success. They have achieved their goals and need to be given an incentive for their work. Under the current system, these employees will have to retire without any proper benefits after their hard work. The Divi Neguma Bill also provides proper retirement benefits for these employees.

Q: How does the Bill interfere with powers vested with the provincial councils?

A: I don’t want to comment on it because it is a matter before court.

Q: The government has been accused of trying to take over powers vested with the provincial councils under the 13th Amendment. How do you respond?

A: Our Constitution, the Mahinda Chinthana and the mandate received by the people are to have a unitary state of Sri Lanka. Safeguarding the unitary structure of the country and serving the people in need are national responsibilities. We work closely with the provincial councils, local governments and the grass root level organizations. There are no divisions between us and we work together. The current programme that is being discussed was started under the Samurdhi system and we are only preparing the necessary legal framework to effectively continue to serve the people.

Q: The TNA has raised the issue of the Divi Neguma Bill in India. How do you see this development?

A: The TNA does not have an authority to talk about the provincial councils. The President has the largest mandate received by any head of state in the country, the government has the highest majority under the PR system and the provincial councils are also under the governing party. Almost 90% of the local governments are also under the governing party. Therefore, how can the TNA speak about development work carried out by the provincial councils? We have the mandate to do what the people need and we have addressed their issues. The TNA got a mandate for the LTTE to divide the country. They were proxies to the LTTE. Hence, they have to express the same sentiments as the LTTE and the LTTE Diaspora is funding them.

A: This is a piece of legislation of Sri Lanka and not any other country. The TNA says it represents the people’s vote, but then why would they raise local issues to other countries. It clearly shows that the TNA does not represent the people of Sri Lanka.

A: There are 27,000 employees in the Samurdhi Authority and one trade union, which has a small membership, has gone before court against the Bill. There’s no basis for this argument. All I can say is that there’s a micro finance organization that has savings under individual accounts. It is only the name “Samurdhi” that will be changed to “Divi Neguma,” that’s all. The ownership will remain the same and it would be under the government. The only difference is that the current institution is an Authority with flexible regulations and not accountable to parliament, while it has been proposed to convert it to a department that is accountable to parliament. There’s more control over a department and there’s job security to the employees. Also, there are no banks under the current Samurdhi system. These so called Samurdhi Banks are not licensed banks under the Central Bank. It is only a name used to inculcate the banking concept among the low-income earners in the country.

Q: The Bill concentrates a large amount of powers with you as the Minister in-charge. Is it a good practice to concentrate a lot of powers in one individual?

A: Yes. However, this Bill does not give any powers. In fact I have more powers as a Minister now than when the proposed legislation is implemented. The minister is responsible to the people and has to answer to parliament. Therefore, responsibility and power has to be with one individual. There would otherwise be no proper control. What is being said is a new theory to destroy the structure of the current governing system. The minister cannot act outside the law. There are rules, regulations and guidelines the minister would have to follow under the proposed legislation. It is clear that one person has to be responsible for the operation in order to be able to respond and for the sake of accountability. The supremacy of the people is important and we are responsible to the people. Some day another minister would take this office and he too would have to follow the same guidelines, rules and regulations.

Q: The Bill has also called on employees to sign a confidentiality clause. Is it not a violation of their rights?

A: This is also in the Samurdhi Act prepared by the Legal Draftsman. It is important to understand that the proposed department would collect information, especially personal information, of low-income families. An individuals’ personal information has to be protected. This is not a new clause dedicated only to this department. It could be seen in almost every piece of legislation.

There are so many new theories because a Rajapaksa is proposing this legislation. People should not look at this through the Rajapaksa glass.

It has to be understood that at least one person would have to suffer for each day the Bill is being delayed from being approved.