(Kumar David) They say that if you are deceived once it’s the fault of the con artist, but if you are taken for a ride a second time you are an imbecile. What if you are lied to from day one till kingdom come and you nod and say, “Oh yes, that’s great” every time? Surely it must mean that you are party to the deception. That’s Manmohan Singh and the mandarins in Delhi. And what if you arm twist the miserable, impotent, Lankan Tamil leaders, leaving them with no option but to squeal and comply, “Yes sir, no sir, three bags full sir.” 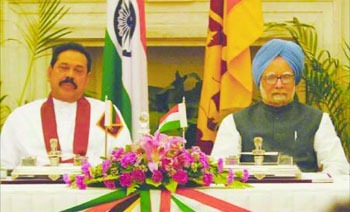 Mahinda Rajapaksa visited Delhi and laid out a supreme con (again) and the Indian Prime Minister pretended he gulped it all. Rajapaksa who was playing for time and gaming international pressure and the up coming Human Rights review, said, “I say Singh, if you get that pain in the butt Sampanthan to come sit in the Parliamentary Select Committee (PSC) I promise that this time, at least I won’t play the Tamils and the TNA for unmitigated suckers.” Singh of course knew it was just another version of Aesop’s fables but pretended to swallow it hook, line and sinker. So he sent for the TNA, made pomp and pageantry of his concern for the Tamils of Lanka, and rammed Rajapaksa’s hoax right down the throats of the poor fellows who had not a chance in hell of refusing. Rajapaksa has pulled off one more conjuring trick; a rabbit out of a hat, sorry, turban.

Fortunately the TNA can’t stomach it in perpetuity without indigestion, so after returning, it is putting up a bit of a fight by demanding that Rajapaksa commits to moving the PSC along the lines of five previous agreements including Chandrika’s 2000 draft Constitution and the APRC Expert Committee Majority Report. If Rajapaksa agrees to even a fraction of these conditions I will change my name to Percy Basil Gotabaya. But no worries, I am certain my current name is 100% risk free; there will be no movement on the Tamil question; that’s how the Rajapaksa’s want it.

When the LTTE imbeciles committed de facto suicide, they simultaneously killed any hope of devolution and Tamil political rights for another generation. Someone asked me the other day, “When was the defeat of the LTTE sealed?” and I answered, as I have been for the last 20 years, “The day it prioritized the military struggle over the political struggle the defeat of the LTTE was certain; every one of its other mistakes flows from there.”

“Why on earth is the state going to make concessions?”

Having pulverized the LTTE and smashed the militants who had grabbed Tamil leadership, why on earth is the state going to make concessions that the Tamils had failed to secure on the battlefield? Let’s face it; it’s a flat NO to devolution and Tamil political rights. Tough luck for the Tamils but that’s the truth. Maybe it is the Sinhala State that is their executioner, but it was the LTTE that led them up the garden path to the chopping block.

Negotiations with the Tamil diaspora

In this context where does the government’s announcement that it will commence negotiations with the Tamil diaspora fit in? Sure it may be able to find a few quislings and try to drive a wedge between overseas Tamils and the TNA. Or maybe it hopes to create a rift between local Tamils and the TNA which has now emerged as their voice. But this cock won’t fight; rather than be used by Rajapaksa, GTF, BTF and the Trans-national bunch will be gadflies and corner him globally. So that can’t be the game plan. Then is it to get the heat off in the persistent diaspora demand that the heads of this government be investigated for war crimes? I think not again because both America and India are suffering from Tamil fatigue, just going through the motions but not pursuing the war crimes agenda with any vigour. Hence my take is that engaging the diaspora is another red herring, not an initiative that the government will pursue with energy. Maybe some guys will get a few trips, nothing more will come of it.

The Sonia-Singh government committed itself unreservedly to the Rajapaksa side during the last few years of the civil war. The logistical support Delhi provided to the Lankan military was invaluable in hastening the LTTE’s defeat. Sonia-Singh cannot back out of this hole now; even India’s vote in Geneva in March was a most reluctant one. What makes India’s sheltering of Rajapaksa obvious is that it is arm-twisting the TNA into the PSC, but plays blind on the glaring anomaly of the day. Every province in Lanka has an elected Provincial Council but not the Northern Province. Why? Because the TNA not Rajapaksa will win power there and hinder the march towards a corporatist authoritarian state.