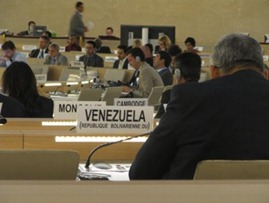 HRW said that Sri Lanka must also be reminded of its international obligations to protect free expression and to stop intimidation of civil society and the media during its UPR at the UN Human Rights Council in Geneva.

The UN scrutinizes the human rights record of each member state every four years, and this review allows governments to examine Sri Lanka’s rights record and make recommendations for improvements. Sri Lanka’s last UPR, in 2008, occurred during the conflict between the government and the secessionist Liberation Tigers of Tamil Eelam, which ended in May 2009.

“Governments should use the UPR to question Sri Lanka’s deteriorating human rights situation and make recommendations for meaningful change,” said Brad Adams, Asia director at Human Rights Watch. “Of particular concern is the government’s ongoing failure to hold anyone to account for numerous deadly abuses by both sides during Sri Lanka’s long war.”

In its 2012 submission for the review, the Sri Lankan government claims that it has taken measures to implement the recommendations made during the 2008 UPR to “investigate all allegations of extra-judicial, summary or arbitrary killings.” However, there is no evidence that any such investigations have occurred. The government also said it would strengthen grievance mechanisms and pursue investigations of attacks against media and civil society. Instead, those abuses have continued, with senior officials publicly threatening those who advocate for government accountability. The government has also failed to censure any official implicated in such acts of intimidation.

In its 2008 UPR, the government said it would strengthen the National Human Rights Commission, which had been downgraded by the international body that regulates national human rights institutions. Instead, the government enacted an amendment to the constitution that stripped the commission of its independence and brought it under executive control.