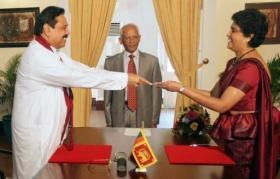 Sri Lanka’s ruling party lawmakers submitted a motion Thursday to impeach the country’s top judge as President Mahinda Rajapakse moved to crush another of his former allies in an escalation of tensions between the government and judiciary.

"Government MPs have handed over a motion calling for the impeachment of the chief justice," Chandima Weerakkody, the deputy speaker of parliament, told reporters.

While Weerakkody did not give details of the motion, one of Rajapaske’s ministers told a press conference that there had been "disagreements" between the government and chief justice stretching back over a period of time.

"The government group believed that the judiciary is overstepping… its authority," said Information Minister Keheliya Rambukwella.

The move is the latest sign of efforts by the government to tighten its grip on power after crushing the Tamil Tigers in 2009 at the end of a 37-year conflict, as well as its willingness to go after its one-time allies.

Sarath Fonseka, the army chief regarded as a national hero for overseeing the defeat of the Tigers, was jailed after trying to run against Rajapakse in 2010. He was freed in May this year but remains barred from contesting elections.

Rambukwella said that the speaker of parliament Chamal Rajapakse, who is the president’s eldest brother, would appoint a panel to go into charges against the chief justice.

The minister said 117 ruling party MPs had signed the impeachment resolution by Thursday morning, including himself.

An impeachment motion only requires a minimum of 113 of the 225 lawmakers for it to succeed. However the process could take months and requires an address to parliament by the president.

"When there are disagreements with the judiciary and the legislature, we need to take action so that we can move forward."

Bandaranayake, 54, was appointed as the country’s first woman chief justice in May last year and she has another 11 years in office unless removed through an impeachment motion.

A former professor of law, she had been hand-picked for the top judicial job by Rajapakse’s government last year. Her husband was also appointed to politically sensitive posts in state financial institutions.

But the relationship has broken down in recent months with Foreign Minister G. L. Peiris telling MPs that the chief justice had flagrantly "violated the constitution" by appointing a junior judge to head up a judicial watchdog.

Analysts say the real reason for the outburst was Bandaranayake’s decision to shoot down a bill that sought to take away powers of local bodies and transfer them to the economic development minister — who is the president’s younger brother Basil.

The government’s stand-off with the judiciary comes as it faces heightened international scrutiny of its rights record amid allegations that up to 40,000 civilians were killed in the final months of fighting against the Tigers.