“Today there is a psychological and political warfare waged against the Tamil Diaspora not only to forget the past but also to abhor the whole project of a Tamil state. Domination under the Sinhala dominated unitary state has been justified as a rational and realistic choice,” Sinhala academic Dr. Jude Lal Fernando said at a conference held in Lecce, Italy last Friday. Criticizing the West for tilting the parity of status against the LTTE, he added that “what has been committed is genocide with full international endorsement. It is approved simply to protect the unitary state of the Sinhalese.” The conference titled “We demand our land” was also addressed by TNPF leaders Gajendrakumar Ponnambalam and S. Kajendran, besides Italian EU politician Adriana Poli Bortone, and human rights activist Klodiana Cuka and lawyer Italo Porcaro. 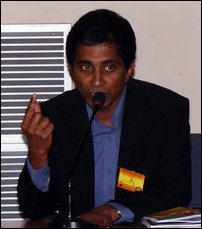 Dr. Fernando, a post-doctoral researcher and lecturer at Irish College of Ecumenics, Dublin, also sharply criticized the position of those in the Western establishments who are now talking about a ‘credible surrender plan’ to the LTTE, questioning their intentions.

“Today, after the colossal massacre of the Tamils in 2009 what is being propagated is that the LTTE kept the people by force and had they surrendered thousands of lives could have been saved. The truth is that thousands of people were killed and thousands were forced to flee the Tamil State due to government’s unbearable military onslaught,” he said.

“Eric Solheim and Frances Harrison argue the West had a credible plan to save these lives had the LTTE surrendered. Was LTTE surrender conditional to save thousands of lives? Why didn’t the West intervene to stop of the carnage? Is it because that the LTTE did not surrender as the West now says or is it because that the West valued the destruction of the LTTE at the hands of the government forces rather than saving thousands of lives? “ the Sinhala academic questioned. 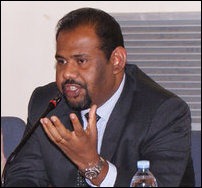 Adding that what was destroyed was the national state of the Eezham Tamils and the people were killed belonged to this state, identifying and belonging to a distinct Eezham Tamil nation, he stated “Therefore what has been committed is genocide with full international endorsement. It is approved simply to protect the unitary state of the Sinhalese. The LTTE was vilified more and more by the US/UK/Indian axis not necessarily because they violated human rights as these powers say, but because that they the LTTE were transforming the de facto state into an exemplary state and were gaining international recognition, particularly within EU countries.” 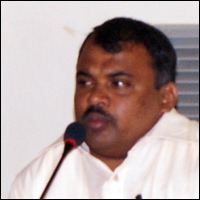 Mr. Ponnambalam opined that GoSL is still continuing with its genocidal policy even three years after end of the war 2009 through militarization and land grabs in the Tamil homeland, so as to remove the Tamil nation from Sri Lanka’s map. He also said that Tamils’ sovereignty over their traditional homeland should be recognized by the International Community.

Talking about the so-called resettlement process of the Eezham Tamil IDPs, Mr. Kajendren said that instead of resettling IDPS in the Tamil historical homeland, they are dumping them in forests where they have no basic amenities, explaining in detail the kinds of sufferings such ‘resettled’ people were undergoing. He also added that if the IC does not address the grave issues facing the Eezham Tamils, the very existence of the Eezham Tamil nation in the island will be in question in the next few years. 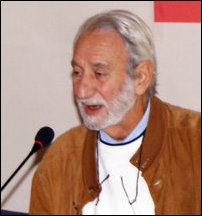 Senator Hon. Adriana Poli Bortone, a member of the 14th Standing Committee (European Union Policies) and IO SUD party leader, said that she will be submitting a motion in Parliament regarding the actions to be taken in favour of the Tamil people to safeguard their fundamental rights. She was of the opinion that the European Parliament should take measures that are practical and effective to help the Eezham Tamils.

The President of Integra Onlus, and organization working for the rights of immigrants, Klodiana Cuka expressed his solidarity towards the issues of the Tamils, and also supported an upcoming conference to be organized approximately the in month of January at the Italian parliament building in Rome.

Human rights lawyer Italo Porcaro expressed his solidarity with the Eezham Tamils, recalling his commitment to the Tamils who were seeking political asylum in Italy. He also called upon asked the Ms. Bortone to help the Tamil people in a concrete way by a debate in the Italian Parliament.

Alfredo Mantovano, Secretary to the Italian Minster of the Interior, sent a mail conveying his good wishes to the conference.

The conference saw the participation of Italian activists and second-generation Eezham Tamil youth.

The conference was part of a three day event to raise awareness on the genocide of the Eezham Tamils and their political demands, jointly organized by Integra Onlus and the country councils of Eezham Tamils in Europe.