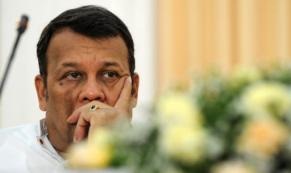 Speaking before the UN Human Rights Council, which was conducting a periodic review of Sri Lanka’s human rights record, Mahinda Samarasinghe stressed "there are still some elements that support the (Tamil Tigers or) LTTE’s cause of dismemberment and separation of our island nation."

"We are aware that reconciliation is not an easy exercise, nor is it one that can be achieved overnight," said Samarasinghe, who is also Sri Lanka’s Plantation Minister.

His comments were part of a very long list of measures he said his country had taken to promote development and improve the human rights situation there since its 37-year conflict ended in 2009.

He mentioned among other things human rights training for police and military members aimed at eliminating torture and abuse, the acceleration of demining work, efforts to locate thousands of people still listed as disappeared and abducted, and the rehabilitation of former combatants and child soldiers.

Government forces crushed Tamil Tiger rebels, who had been fighting for independence in the north, and have vowed to ensure genuine reconciliation.

However, international rights groups have raised concerns about the rule of law and accountability in Sri Lanka as it emerges from nearly four decades of ethnic conflict that claimed up to 100,000 lives.

On Thursday, as several countries, including the United States, demanded an end to the militarisation of the north of the country, Samarasinghe insisted that Sri Lanka had made significant reductions in its military forces in the region since the end of the conflict.

The US representative to the Human Rights Council, Eileen Chamberlain Donahoe, however lamented that "former conflict zones remain militarised, and the military continues to encroach upon daily civilian and economic affairs," also pointing out that it was the ministry of defence that was responsible for overseeing non-governmental organisations.

And amid news that ruling party lawmakers in Sri Lanka had submitted a motion to impeach the country’s most senior judge, Shirani Bandaranayake, Donahoe also called on the government to "strengthen judicial independence by ending government interference with the judicial process."