The global conference organized by British Tamils’ Forum (BTF) and All Party Parliamentary Groups for Tamils (APPGT), involving participation of civil society activists and politicians from the island and Tamil Nadu, diaspora groups, and British parliamentarians, on Wednesday called for an independent international investigation on the complete conduct of the Sri Lankan state against the Tamil nation, specifically calling for an investigation on the allegations of war crimes, crimes against humanity and genocide committed by the GoSL on the Tamil people. The proposed resolution also urged the global civil society and leaders of the IC to stop decimation of the Tamil nation by the Sri Lankan state.

pdf: Resolutions adopted by the delegates of the London Conference

Arguing that what Sri Lanka was doing to the Eezham Tamils was a genocide, which was “systematic dismantling the existence of Tamils as a nation in the island of Sri Lanka”, he said it was imperative to recognize the Tamils as a nation.

Suresh Premachandran from the Tamil National Alliance (TNA) also spoke to the audience about the gross injustices that the Tamils were facing under the Sri Lankan state.

Sinhala academic Jude Lal Fernando opined that investigation should not just stop with the officials within the Sri Lankan system and the government, but that the role of the US, UK and Indian government should also be probed for their role in the genocide.

Speaking to TamilNet, Mr. Fernando urged the EU countries, who upheld the parity of esteem between the GoSL and LTTE at the 2002 peace process and who resisted a militaristic solution until the US-UK governments advanced such a solution, to take a lead in establishing an independent international investigation.

He further added that the EU countries should revive their principled position, opposing militarization and the ongoing destruction of the Tamil nation.

Thirumurugan Gandhi from the May 17 movement, criticizing the colonial responsibility in creating the unitary structure of Sri Lanka, told TamilNet that after May 2009, there was no protection whatsoever for the Eezham Tamils under the Sri Lankan state. He also urged for a just solution for the Eezham Tamils as delivered to suppressed nations like South Sudan, Kosovo and East Timor.

Lee Scott, Conservative MP and the chairman of the APPGT, said that for peace and harmony, there should be justice. He strongly emphasised that a list of those missing people must be provided by Sri Lanka. He pledged to be at the side of the Tamils until reconciliation and justice for all sides is achieved.

Robert Halfon, the vice chairman of the APPGT, asking why some genocides were recognized but the genocide of the Tamils was not recognized opined that genocide of Tamils should be recognized by the UN and all over the world. He also said that he would urge the UK not to have the Commonwealth summit in Sri Lanka when continued ill-treatment of Tamils is still continuing.

Others from the APPGT also spoke at the event.

M.K. Stalin from the DMK said that dignity and self-respect of Tamils in the island must be defended. Many in the audience, however, resented to his reference of the Eezham Tamils as a ‘minority’ in Sri Lanka. A diaspora activist in the UK questioned whether Mr Stalin was reneging on the promise of the DMK to push for a referendum among the Eezham Tamils, which could happen only if they were recognized as a nation. 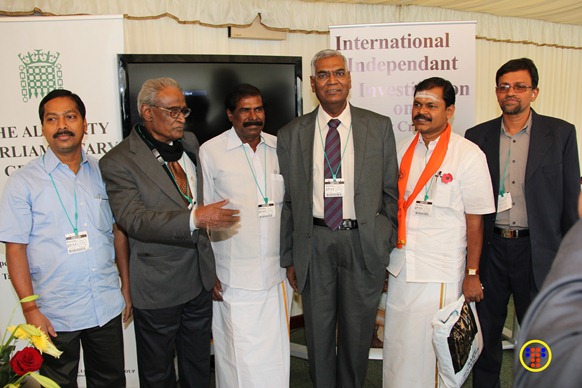 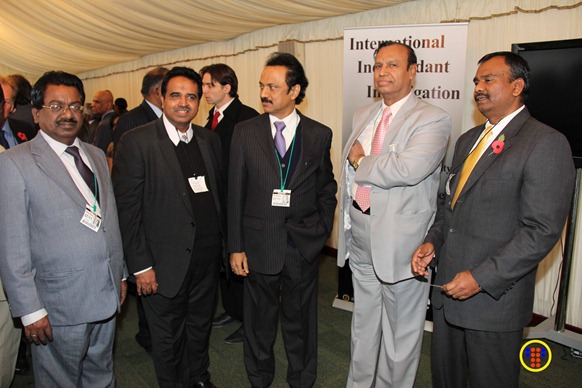 [L-R] T.K.S Ilangovan, a Lok Sabha member of DMK, M.K Stalin, a member of Legislative Assembly of Tamil Nadu and the treasurer of DMK, T. R. Balu, a DMK member of Lok Sabha together with Tamil delegates 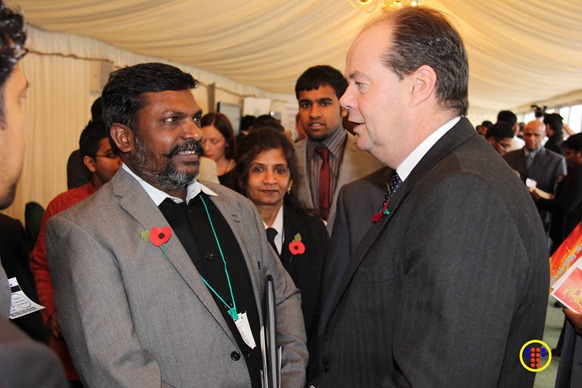 Mr Thol Thirumavalavan, a Lok Sabha member of VCK talking to a British politician at the London conference

D. Raja, the national secretary of the Communist Party of India (CPI), condemning genocide, urged India to take a clear cut stand. He hoped that the govt of India would change its position in the favour of Tamils. He also reiterated his party’s commitment to the cause of the Tamils.

G.K. Mani, the president of PMK, opined that after the protracted genocide of the Eezham Tamils, it was impossible for them to live together with the Sinhalese, and urged the international community to faciliatate the creation of a free Tamil Eelam and an independent international investigation in the genocidal crimes of Sri Lanka.

Thirumavalavan from the VCK talked about how militarization of the Tamil homeland was affecting the lives of the Eezham Tamils. Arguing that Sri Lanka cannot investigate its own crimes, he pushed for an independent investigation into the genocidal crimes of the Sri Lankan state.

“The delegates of the conference were steered away from naively articulating their demands towards firmly articulating the position of the Tamil people,” a representative of the civil society from the island told TamilNet adding that the contribution of actors and activists from the ground was constructive in this regard.

“It is a significant move as different political actors have come together to describe the present and past crimes against the Tamil people as genocide of a nation,” he said.

The resolution was read by Ravi Kumar from the BTF.