Nadarajah Mathinthiran alias Parithi, an ex-LTTE commander who had left the movement in the early 90’s and later coordinated Tamil organisational political activities in France since 2003, has been assassinated Thursday evening outside the office of the Tamil Coordinating Committee (TCC) in Paris, news sources in France said. People close to the 50-year-old organiser, who was also known as Reagon, blamed the Sri Lankan military establishment for the assassination. “This seems to be a psyop assassination serving the agenda of the Sri Lankan state targeting the political mobilisation of the Tamil diaspora,” Mr Pradeep, an independent political activist based in Paris told TamilNet. The French Police is investigating the killing. 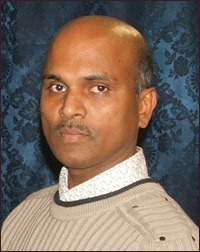 Mr Mathinthiran was shot at least three times when he was leaving the office of the TCC around 9:00 p.m. at Pyranees in Paris 20.

The assassination has come at a time when Tamil groups in Paris were shedding away their internal differences of opinion, diaspora Tamil activists said, passing the entire blame of the assassination on the Sri Lankan military establishment.

Mathinthiran was given with the nom de guerre, Reagon, when he joined the LTTE in 1983. He received his military training in the 2nd batch of the LTTE’s training programme provided by India. Some of his batch mates in the training camp in India were Kumarappa, Bhanu, Ranjan Lala and Vasu, confirmed an ex-LTTE member who also had received training in the same batch.

Reagon took part in the early operations of the LTTE against the Sri Lankan military in Mannaar, Jaffna and Vanni. He was a middle-level commander when he left the LTTE in the early 90’s.

In 2003, when the Tiger leadership was engaged in transforming its diaspora network from its earlier structure, Mathinthiran, now named as Parithi was appointed as the coordinator of political and fund-raising activities in France.

When the French authorities went on a crackdown of LTTE fundraising activities, Mathinthiran alias Parithi was held under arrest from 2007 to 2010 and was subjected to legal proceedings. He was released in 2010 under several conditions of monitoring by the French. He was not allowed to have any formal position in any organisational activities, legal sources said.

Two weeks ago, the French legal proceedings sanctioned him a 10 months probation period that would have put him under close monitoring with restricted movement, including electronic monitoring. This term was to commence in a couple of days, and had it commenced, it would have been difficult for anyone to assassinate him, the legal sources further said.

“The slaying of Parithi seems to be the work of a professional killer, who has fired at him at the bus stop located near the TCC office. Mr Parithi, in his attempt to flee from the killer seems to have crossed the road with injuries and fell dead. The killer chose to chase him to the opposite side of the road and fled the scene only after verifying his death,” a source which was in touch with the investigators said. The bullets have also hit a vehicle and a shop at the site.

Nadarajah Mathinthiran, who leaves behind his wife and a daughter, had narrowly escaped from a gang that had attacked him with swords on the Halloween day last year at the same site.

Tamil nationalist organisations, activists and the public in the diaspora are enraged over the assassination targeting the TCC.

As the armed struggle of the LTTE is silenced now, capturing the politics remaining and making it subordinate to the genocidal state in the island, seem to have become the coordinated aim of several elements that had set stage for the Vanni war, commented sections of diaspora political observers.