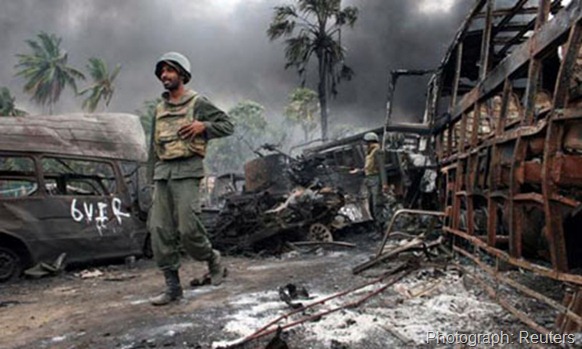 An internal United Nations report has strongly criticised its own officials for failing to protect civilians during the last days of the decades-long civil war in Sri Lanka, saying it could have done much more to save lives.

More than 30,000 civilians died during fighting between militant Tamil separatists from the Liberation Tigers of Tamil Eelam (LTTE) and the country’s armed forces in battles that culminated in the total defeat of the LTTE in May 2009.

The Sri Lankan military has been held responsible for most of those deaths by many observers and is accused of indiscriminately shelling areas where a small number of fighters were mixed with huge crowds of refugees. Authorities deny the charge.

The report, leaked to the BBC, is due to be presented to the UN secretary general, Ban Ki-moon, on Wednesday in New York. It paints the organisation’s Sri Lanka operation as crippled by a lack of experience and susceptible to government intimidation.

The UN should "be able to meet a much higher standard in fulfilling its protection and humanitarian responsibilities", it says.

According to the BBC, the report says that "many senior UN staff did not perceive the prevention of killing of civilians as their responsibility … and agency and department heads at UN [headquarters] were not instructing them otherwise". There was, it is claimed, "a sustained and institutionalised reluctance" among UN personnel in Sri Lanka "to stand up for the rights of people they were mandated to assist".

Former UN officials serving in the Sri Lanka at the time say they were forced to make difficult decisions under great pressure. The report, the work of a panel led by the former UN official Charles Petrie, details how the organisation failed to publicise authoritative data about the human toll of the fighting as casualties mounted. It criticises an earlier decision to withdraw UN staff from zones where much of the killing later took place because the Sri Lankan government said their safety could no longer be guaranteed.

The Sri Lankan government, dominated by nationalist politicians from the Sinhalese majority, was determined that international public opinion would not prevent it eradicating the LTTE in a final, brutal campaign that would end the 25-year-old civil war in the island nation.

The Tamil Tigers were responsible for numerous human rights abuses in the zones they controlled in the northern part of the country, including forced conscription of teenagers for their military. They also pioneered the tactic of suicide bombing.

The Sri Lankan government successfully prevented independent witnesses such as diplomats, reporters and representatives of NGOs from reaching the combat zones during the last months of the war.

A UN spokesman said the organisation would comment when the report was published in the coming days. There was no immediate statement from Sri Lankan authorities in response to the leak.

Though Sri Lanka’s GDP rose by around 8% during 2011 and tourism is set to bring in more than $1bn this year, the popularity that President Mahinda Rajapaksa, who took power in 2005, won among the Sinhalese majority after the victory over the Tamil Tigers has faded.