UN chief Ban Ki-moon acknowledged the failure of the UN system in meeting its responsibilities to respond to the human rights violations in Sri Lanka’s bloody civil war after a panel set up by him criticised the world body for its “grave failure” in handling the situation during the final stages of the conflict.

“The United Nations system failed to meet its responsibilities,” Ban said after he released a United Nations report on accountability issues stemming from the final months of the 2009 war in Sri Lanka. 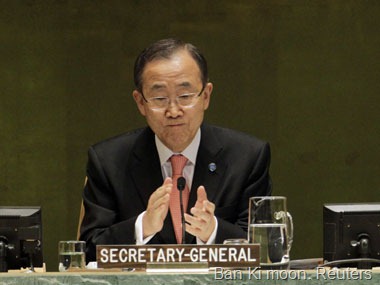 The report was produced by a panel of experts, established by the UN chief in 2010 to advise him on measures to advance accountability following the war’s conclusion, and after an agreement with Lankan President Mahinda Rajapaksa.

In completing its eight-month study, the panel reviewed about 7,000 documents, including internal UN exchanges with the government of Sri Lanka.

Sri Lankan government forces declared victory over the rebel Liberation Tigers of Tamil Eelam (LTTE) in May 2009, after a conflict that had raged on and off for nearly three decades and killed thousands of people.

The final months of the conflict had generated concerns about alleged violations of international human rights and humanitarian law. The report by UN official Charles Petrie was particularly critical of the Security Council’s inaction in responding to the crisis.

“In particular, the Security Council was deeply ambivalent about even placing on its agenda a situation that was not already the subject of a UN peacekeeping or political mandate; while at the same time no other UN Member State mechanism had the prerogative to provide the political response needed, leaving Sri Lanka in a vacuum of inaction,” it said.

The report added that UN action in Sri Lanka was not framed by member state political support.

“In the absence of clear Security Council backing, the UN’s actions lacked adequate purpose and direction. Member States failed to provide the Secretariat and UN Country Team with the support required to fully implement the responsibilities for protection of civilians that Member States had themselves set for such situations.”