While the accusation that Dr. Susan Rice, the U.S. Ambassador to the United Nations, intentionally mislead the public by saying that the Bengazhi killings of four Americans was a spontaneous attack in response to a film mocking prophet Mohammed, appears to have damaged her chances of being appointed as the U.S.’s Secretary of State after Hilary Clinton, Rice’s human rights record in the U.N., including her inaction on Sri Lanka killings, has also come under closer scrutiny, Washington Post said in an article this Friday, quoting comment from an official of the Human Rights Watch. 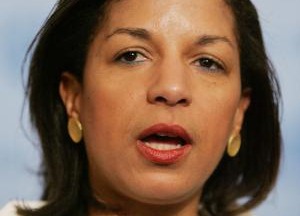 "Rice speaks often about her commitment to human rights, a cause that allies say is central to her worldview. Yet, one of the world’s leading human rights advocates has been a frequent critic. “She tends to be strongest when the human rights violations involved are committed by U.S. adversaries,” Kenneth Roth, the executive director of Human Rights Watch, told Foreign Policy.

“But she [Rice] is less strong when violations are committed by U.S. friends, like Rwanda or Israel, or by governments more in the middle, like Sri Lanka,” Washington Post said quoting Roth.

TamilNet reported earlier that "[i]n March 2009 Sri Lanka had come to the attention of the UN’s Special Adviser for the Prevention of Genocide, Francis Deng, but despite his disquiet he did not take further steps as Sri Lanka had assured him the United States and India supported its military campaign, according to a leaked US cable.

"The account of the meeting on March 16, 2009 between Mr. Deng and the US Ambassador to the UN, Susan Rice, as well as other US cables, shows how international inaction and silence, rather than ignorance, made it possible for Sri Lanka to continue and escalate its mass killings of Tamil civilians."

Largely pointing to the ineffective advocacy of Susan Rice in the UN, a Washington Post article in September 2009 said, "[Obama] Administration has pursued a low profile approach to Sri Lanka, where a military offensive against rebels is believed to have killed thousands of civilians," and added that rights advocates have been frustrated by several episodes and said US’s new approach has undercut U.S. leadership on human rights issues.