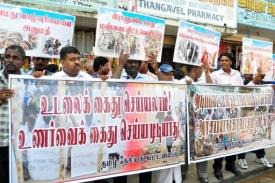 Hundreds of ethnic Tamils in Sri Lanka staged a major protest in the former war zone of Jaffna on Tuesday, the first since the end of the civil war three and a half years ago and a sign of growing tension.

Local politicians joined the demonstration denouncing security forces and the government at the main bus station in Jaffna, a one-time rebel heartland in the north of the country which was run by the Tamil Tiger separatist group.

"This is the first big protest against the government since fighting ended in 2009," Tamil lawmaker Suresh Premachandran of the Tamil National Alliance (TNA) party told AFP.

Premachandran, who represents the Jaffna constituency in parliament, said over 1,000 people joined the peaceful demonstration as police and troops watched from the sidelines.

At least 20 students were hurt in the worst ethnic violence since the end of the decades-long war. Witnesses said police and plain-clothed security personnel attacked students — a charge the military denied.

Sri Lanka’s army, which is almost entirely made up of ethnic Sinhalese, crushed the ethnic Tamil rebels in May 2009 in an onslaught that has since been dogged by war crime allegations.

Foreign governments and rights groups have since pushed victorious President Mahinda Rajapakse to reach out to Tamils, offer concessions and bring the country together, but he has faced criticism for moving too slowly.

Security forces still have a strong presence in the former war zone amid fears that Tiger remnants could try to stage a comeback.