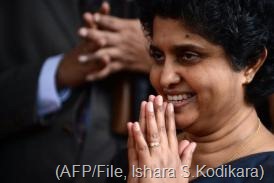 A report submitted to Sri Lanka’s parliament is widely expected to call for the impeachment of the country’s top judge over allegations of professional misconduct, an official source said.

The probe has raised international concerns that Sri Lanka’s regime is trying to control the judiciary after crushing Tamil rebels in 2009 and consolidating its hold on power.

"We have examined 16 witnesses and arrived at our conclusion," Yapa told parliament, which is constitutionally required to hold a vote in one month to decide Bandaranayak’s final fate.

A parliamentary official, who declined to be named, said the panel had found Bandaranayake guilty of at least two of 14 charges of financial and professional misconduct levelled by the ruling United People’s Freedom Alliance.

"We understand the panel accepted some of the explanations of the chief justice, but she has also been found guilty of at least two charges," the official said.

Under parliamentary procedure, if the chief justice is found guilty of even one charge, and a majority of the 225-member house votes for her removal, the president can impeach her.

The ruling party holds two-thirds of the house.

The move to impeach Bandaranayake came after she scuttled several bills, including one that gave more powers to President Mahinda Rajapakse’s brother Basil, the economic development minister.

Opposition committee members hearing the accusations walked out Friday, a day after Bandaranayake staged a similar walkout, leaving the process in disarray amid charges that the government is determined to get rid of her.

The US embassy in Colombo said it was "very concerned" about the impeachment process and demanded that the government follow the rule of law.