The European Union listening to wrong advice from the top and proscribing the Tamil movement was a serious mistake that disrupted peace, said Srinivasa Rao Thangavelu, a grassroot peace ambassador touring world, speaking at a brief session held at Café Nobel in Hotel Opera, by Oslo International Club together with Brussels Alumni, right before the torchlight march honouring Nobel Peace Prize award on Monday. The session was on “Creating lasting peace: top-down and bottom-up.” This time’s Nobel Peace Prize was awarded to European Union. According to EU Commission President, the EU brings lasting peace among former enemies who fought, among others, two world wars. Usually Norwegians conduct a torchlight parade to honour the Peace Prize winners. But this time there were two: one on Sunday opposing the award going to the EU and the other on Monday honouring the EU.

Speaking at the Oslo International Club meet, Mr Srinivasan said that the EU decision misled from the top to proscribe the Tamil movement was taken at restaurant discussions outside the EU offices, despite repeated requests by the Nordic peace monitors, not to disrupt the peace mission.

The Eezham Tamils living in Europe, living in Norway, are disappointed with their governments and the supranational entities like the EU and the UN, Srinivasan said.

He also criticised the Norway government and the then minister facilitating peace for their failures on Tamils, but said that there are experts in Norway who stand on moral high ground.

“I was watching ‘One on One’ television discussion show by Riz Khan on Al Jazeera a few months ago. Kahn was interviewing a great academic and activist, Johan Galtung, who is described as the father of peace studies. He is a Norwegian. Khan was asking, what Dr Galtung regretted the most in the field of peace making and his first response was the case of Tamils of the island in Sri Lanka,” Srinivasan cited. 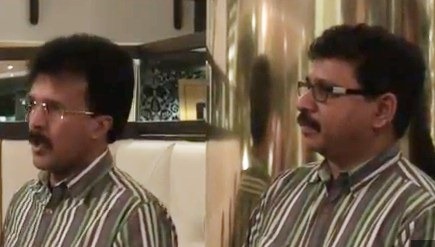 Srinivasan, who as a grassroot ambassador carried the message of nuclear disarmament, world peace and protection of environment to 120 countries, three UN Secretary Generals and other world leaders, spoke on the side of “Bottom-up” at the session. Mr. R. Gnanasekaran, who is on the mission with Mr Srinivasan for the past 26-years, was also present at the session.

Saying that this was their 8th touring mission, Srinivasan told the audience that during their recent travels and staying with Eezham Tamils, they were able to witness the sufferings of a people affected by genocide in their homeland. 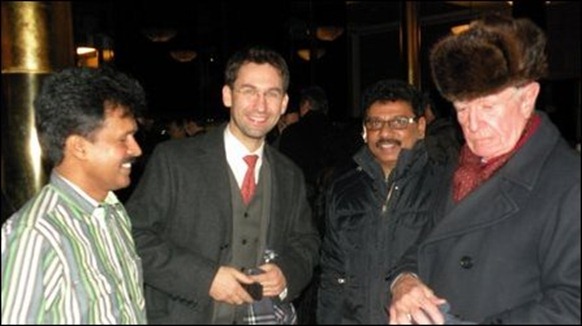 Eivin Berg, former Norway Ambassador to EU [Right] together with Srinivasan and Gnanasekaran and Jørn Lein Mathisen, who chaired the session, jointly organised by OIC and Brussels Alumni

Later, speaking to TamilNet and elucidating on his views, Srinivasan said that geopolitical interests of powers cannot be allowed to result in the genocide of the people of a nation and that’s why they had taken up the question for their mission in their recent travels.

All the Establishments of the world provided direct and indirect support to the regime in Sri Lanka to accomplish the first genocide of this century, Srinivasan said, citing the contrasts as well as invariability of powers: Pakistan and India, Israel and Iran, China and the USA, Britain as well as Russia.

In the 21st century, if this can happen for geopolitics and end up in genocide, then it is the prime question to be taken up on world peace, Srinivasan said.

He recollected his experience of witnessing the International Community of Establishments being at war with the People in Africa, West Asia and elsewhere.

There is also a tendency to imagine ‘peace’ through military action, he said.

“During our interactions we find more and more Eezham Tamils in the diaspora feeling that their struggle for justice is not merely with the Sinhala Nation, but increasingly with the International Community of Establishments,” Srinivasan said.

Leaders at the top must act with statesmanship and the EU deserves the award only when it admits the failures and course-corrects itself essentially to provide justice to the victims. Not delivering justice, but saying that learning lessons here will help future cases, will not make anyone as peacemakers, Srinivasan further said.

On Sunday, hundreds of protestors were seen marching in Oslo against Nobel Peace Prize going to the European Union.

Peace and human rights campaigners as well as members of political groups, including Norway’s Socialist Left Party in the government, were among the protestors.

The torchlight protestors marched past the hotel where the Nobel Peace Prize recipients were staying.

According to the protestors, EU is undemocratic, one of the biggest weapon producers of the world and maintains a large military even when its people economically suffer.

Past prize winners, Desmond Tutu, Adolfo Perez Esquivel and Mairead Maguire have also said the EU does not deserve the award and that it contradicts the values associated with the prize because it relies on military force to ensure security, reported MailOnline.