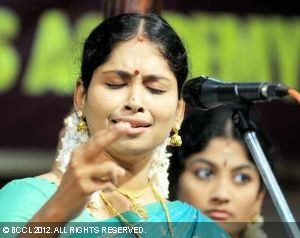 Classical vocalist Nithyasree Mahadevan’s husband Mahadevan committed suicide by jumping into the Adyar from the Kotturpuram bridge near their home in Chennai on Thursday afternoon.

Police said Mahadevan reached the bridge in his white Honda City, driven by his driver, around 1pm.

"He apparently asked the driver to stop the car and stepped out, talking on his mobile phone," said a policeman at the scene.

"People who saw him jump off the bridge into the river called the fire and rescue service."

Rescue personnel pulled him out and an ambulance took him to a private hospital around 1.30pm. Soon, doctors in the hospital declared him dead.

The news came as a shock to the city which has been celebrating the annual Margazhi music festival.

Nithyasree, who has been performing at various sabhas this year, was to give a performance on Thursday evening at the Rama Rao Kalyana Mantap as part of the margazhi festival. She is the granddaughter of D K Pattammal, considered one of the Female Trinity of Carnatic music, along with M S Subbulakshmi and M L Vasanthakumari.

Around 2.30pm, a few policemen visited Nithyasree at her house in Kotturpuram. Ten minutes later, one of the couple’s daughters was brought from her school. The girl was seen running into the house, crying. Relatives and family friends have been visiting the house since the incident.