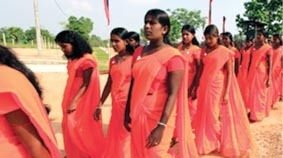 Some of the Tamil females, who were recruited to the army and reportedly suffered mental distress after their training course, are said to have gone back to the camps fully recovered.

Military Spokesperson, Brigadier Ruwan Wanigasooriya, said the women have been cleared by psychiatrist to be in perfect health and fit to continue with their jobs in the army.

Psychiatrist, Sivasubramaniam Sivadas, based at the Jaffna Teaching Hospital, who treated the 15 women who are reported to have suffered harsh military training, has refuted the claim of sexual harassment and cleared them of any mental complications. He claims the women had a bout of collective hysteria and are now fit to resume work. It is reported the women opted on their own, to go back to the camp and continue with their jobs.

But many refute this claim and say the women are still in a state of depression and disappointed with their proposed jobs and want to come out of it. A counsellor who wished to remain anonymous, and who claims that he had met the women recruits and spoken to them says, they had no opportunity to establish any trust with the doctor during counselling sessions, for them to come out with their real emotions and feelings.

“After treatment, Dr Sivadas, had just asked them bluntly whether they would like to go home or back to their jobs. And they opted to go back to their jobs. They fear harassment and repercussions in case they leave the army. They are in fear and feel trapped,” he said.

He said they were misled and duped into accepting a job that is against the Tamil people’s beliefs and principles. They were told that it would be a civil job and that they had to work inside the camp. But they had to undergo harsh military training.

“The understanding was that they would work inside the camp, wearing sarees, doing non-combatant work, and return home every day after work. But during the training period, they found the job needed them to carry guns and they found that they were part of the Sri Lankan Army,” the Counsellor said.

Tamil National Alliance (TNA) MP, Suresh Premachandran, confirmed there was no proper procedure followed for the recruitment process. He said the army went from house to house enticing the families and the girls into joining, by offering a salary of Rs.30,000 for the job. For a poverty stricken family in the north Rs.30,000 is big money. “They were told that it was work in the village and an office job, and that there was no military training involved.” He said the women who joined felt ‘cheated’ and six women left the job immediately.

Premachandran said those who fell ill are those who feel trapped and want to go home. “The army doesn’t want to send them back,” he said.

It is learnt that in the years 2007- 2009, they worked for the Liberation Tigers of Tamil Eelam (LTTE) doing ordinary chores and were paid. The understanding among these recruits and families was that working for the army would also be the same.

The recruits are in the age group of 22-23. When they started the intensive training, the female recruits realized that they had to wear fatigues, stay in the camps and do combatant work. This made them feel bad and depressed. They felt that they are traitors to their own community – to be part of the Sinhala Army who have terrorized and killed the Tamil people – their families, their loved ones. Also, their relatives, friends and neighbours have started shunning them and classing them as betrayers.

Further, it is understood, the Kilinochchi Base Hospital has no qualified psychiatrist, but only a diploma holder who could only do counselling sessions. If the counsellor cannot handle the case the patients are referred to the Jaffna Teaching Hospital, which has a fully qualified psychiatrist.

However, in this case, the army did not refer the female recruits to Dr. Jeyaraj – the counsellor at the Kilinochchi Base Hospital, but directly consulted with Dr. Sivasubramaniam Sivadas, a fully qualified psychiatrist at the Jaffna Teaching Hospital. It is not the normal procedure followed they say.

Dr Sivadas, who reportedly treated the 15 Tamil women admitted to the Kilinochchi Hospital, had dismissed reports of sexual harassment or mental disorders. He had described the symptoms as collective hysteria, which arises due to inner conflicts. The women, although wilfully joining the army, were driven by poverty – have found that the job goes against their culture and lifestyle causing inner conflict. They feel the job goes against Tamil nationalism.

Reports taken before they were recruited established that they were physically and mentally stable. And the queer behaviour was a ventilation of their inner feelings.

They have been asked openly whether they wanted to go back home. And they have volunteered to stay. Counsellors say the women had no trust in the psychiatrist to convey their genuine inner feelings. “It is important to establish a rapport and trust with clients before they believe in the counsellor, to divulge their inner conflicts, and for that they need to go for two or three counselling sessions,” he said.

Also, during their stay in the hospital, they were allowed to meet only their parents and no others. Relations, friends and others were not allowed – what was the reason? he questions.

There were three categories of women recruits – those who had no qualms and wanted to continue to work in the army, others who thought that since they have put their feet deep into it there is no way of turning back, and those who want to be let out. These 15 women recruits belong to the last category.

The recruitment process was contrary to the norm and had no advertisement in the newspapers, no gazette notification and no appointment letters.

Ironically, on the day of the recruitment, the parents were given a certificate each thanking them for allowing their daughters to join the army. The fathers were garlanded and the mothers presented with a paper broche as appreciation.

Looking back, he says, on November 14th the girls were informed to get ready and that they will be taken for language training. “On November 15th the girls were taken to the camp. On November 16th the rehearsals commenced and on the recruitment function was on November 17th. The same day, 60 girls created problems saying that they had been fooled to join the army. The girls were crying in the photos that were taken at the recruitment function. This was misinterpreted as some sexual assault that had taken place. This merely because of disappointment and the mere feeling that they had got caught and there was no escape. The girls were scared for their families that if they go back there will be repercussions, perhaps harassment.”

On November 5 they were subject to medical tests and their parents were allowed to join them. Two fathers of the women recruits, who watched the procedure, had found the medical examination very disquieting – akin to army recruitment – and had stopped their children thenceforth. Four girls had left immediately when they came to know that it was not the job they thought they were getting into. The other girls, who had come alone, either did not know or were too scared to withdraw.

On the day of the rehearsal, the girls seeing the army banner displayed on the stage, had reportedly refused to join. But they were again told that theirs would only be civil work and the banner was displayed for the Sinhala soldiers. ”You are not in the army,” they had said. However, five girls who had mobile phones had immediately phoned their parents and left when they arrived.

The women felt trapped and that the situation was beyond their control. And this personality strain has manifested itself as snake dancing or possession by the devil. This is psychological behaviour connected with the culture, which is manifested in a spiritual or dance form.

“These are all uneducated people who care about what their neighbours say and think.”