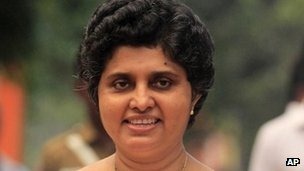 They say the letter signed by President Mahinda Rajapakse was delivered to Dr Bandaranayake’s office.

The parliament, dominated by Mr Rajapakse’s supporters, impeached her on suspicion of corruption – an allegation she denies.

However, recent court rulings said the process was unconstitutional.

Dr Bandaranayake, 54, faced an 11-member parliamentary committee in November which investigated 14 charges of financial and official misconduct against her.

She was found guilty of professional misconduct the following month.

Lawyers close to the country’s first woman chief justice confirmed that she had received the presidential notice, but Dr Bandaranayake has so far not commented on the latest development.

There is now a possibility that she may refuse to quit, as Sri Lanka’s highest courts – the Supreme Court and the Appeal Court – last month quashed the impeachment process as irregular and illegal, the BBC’s Charles Haviland in Colombo reports.

Sri Lanka’s opposition says Colombo turned against the judge it once favoured because she made court rulings that did not suit the president – the authorities deny this.

The government has repeatedly brought thousands of its supporters to the streets declaring Dr Bandaranayake corrupt – a message echoed by the obedient state media, our correspondent says.

But he adds that the government’s disregard for the Supreme Court has triggered international and domestic dismay.

The usually cautious Sunday Times newspaper has described its behaviour as "frightening".

And a prominent Sri Lankan diplomat, Dayan Jayatilleka, said he was "appalled" at the parliament’s non-adherence to the rulings of the judiciary.

Sri Lankan analysts have also warned that the sacking could trigger a constitutional crisis and leave the courts paralysed.

Lawyers have already been boycotting court proceeding, protesting against the impeachment process.