Thousands of Kurds from across the UK took to the streets in London on Sunday condemning the recent assassination of three Kurdish women activists in Paris. Demanding a proper inquiry and immediate justice for the brutal murders women of Sakine Cansiz, co-founder of the PKK, and activists Fidan Dogan and Leyla Soylemez, the protestors raised slogans of ‘”Turkey is a terrorist state” and “We want freedom”. Kurdish sources told TamilNet that the assassination was an attempt to sabotage the Kurds desire for peaceful negotiations and France should act soon, lest it portrays itself complicit by inaction. Large protests were also held in France and Germany on Saturday. These protests saw the participation of solidarity groups and Eezham Tamil activists, who had joined to convey their solidarity with the Kurds.

Sakine Cansiz, a founding member of the Kurdistan Workers Party (PKK), was found shot dead along with two other Kurdish women activists, Fidan Dogan, Paris Representative of the Kurdish National Congress, and Leyla Soylemez, political activist working as women’s representative on behalf of the PKK, in execution style murders inside the Information Centre of Kurdistan, Paris in the early hours of Thursday.

Besides the participation of grassroots Kurdish organizations, the protests also saw the involvement of solidarity groups like the Turkish Marxist-Leninist Communist Party (MLKP) and others.

The protest, which began as a march from Halkevi Centre, Dalston Lane, culminated at the Kurdish Community Centre, Haringey, with numerous Kurdish activists and others speaking to a massive gathering.

Condemning the assassinations as an attack on the Kurdish nation’s desire for peace, the Kurdish speakers unanimously called on the French government to expedite the process of investigation and justice.

Noting how the ‘terrorist ban’ on the PKK was used as an excuse to clamp down on Kurdish activism in the West, Margaret Owen, OBE, Barrister, called for the delisting of the PKK, contending that it was not a terrorist organization.

Dr. Andy Higginbottom, Principal lecturer in Politics and Human Rights at Kingston University, speaking for Colombia Solidarity, said that refugees have the right to organize free from fear of repression or murder. He further asked why the French government seems to have given impunity to assassinations of activists.

Tamil youth activist Sasithar Maheswaran and research scholar Karthick RM also spoke at the event, conveying solidarity with the Kurds on behalf of the Tamils.

Mr. Sasithar noted the similarities between the Paris assassinations of Eezham Tamil grassroots activist Parithi in November 2012 and that of the three Kurdish women activists, further criticizing the French government for its lethargic approach in dealing with such grave crimes. He opined that the ban and criminalization of organizations like LTTE and PKK encouraged such assassins to act with impunity.

Mr. Karthick, who said that France was becoming a safe haven for rogue states to murder activists working for peace, justice and freedom, urged for a strengthening of bonds between the Kurds and the Tamils. The deaths of the three Kurdish women activists will not intimidate, but will only strengthen the Kurdish nation’s desire for freedom, he opined.

The protests by the Kurdish diaspora in Germany and France also saw participation from Eezham Tamil activists. 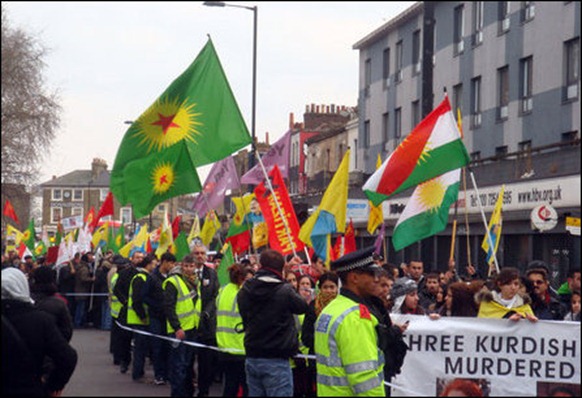 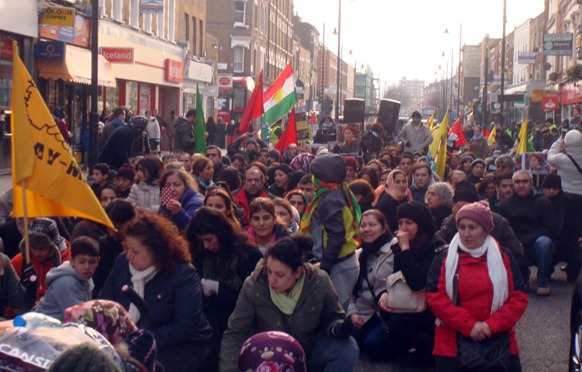