Members of Front Line Socialist Party (FLSP), a breakaway faction of the JVP of the Sinhala South, who were seeking end of SL military rule over Tamils, land grab and abductions, as well as release of all political prisoners and Jaffna University student leaders were attacked publicly in the heart of Jaffna city, allegedly by SL military intelligence squads on Tuesday. The political faction from the South, under the banner, Sama Urimai Iyakkam in Tamil (Movement for Equal Rights) was engaged in a signature campaign among the Tamil public when motorbike squads attacked them and threw crude oil on to them in the typical way the SL military intelligence used to carry out attacks on Tamil activists in Jaffna. 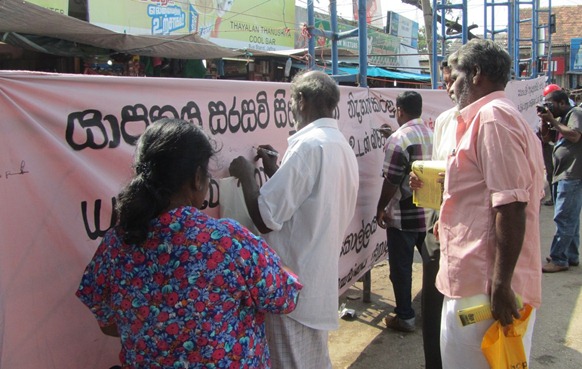 Members of the public and journalists were targeted in the attack. 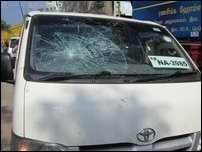 The vehicles in which the southern political activists arrived were also attacked.

According to news sources, the members of the public were responding to the call of the southern political activists and were enthusiastically signing on the banners carried by the activists of the FLSP.

The Front Line Socialist Party, led by Premakumar alias Kumar Gunaratnam, a veteran activist of the old JVP, finds criticism from sections of Sinhala left that the FLSP has not taken any defined stand on the solutions to the national question.

“Our stand is very clear which says that devolution of power is not a solution for the national question in Lanka,” says a clarification note coming from the FLSP.

“We oppose the present unitary constitution and any future federal constitution under these circumstances quite similarly as both reflect the same capitalist objectives and also hide the bourgeois class character,” the note said adding that “When we oppose a federal system it doesn’t mean that we refuse it as a form of a governmental structure at all as we oppose only the class character and not the structures.”

“On the other hand, if we are compelled to deal with the reality and a practice of a federal constitution, the dealing with the national question will proceed onwards the same as right now,” the note further said.

Except Vickramabahu Karunaratne’s NSSP, none of the Sinhala Left in the South has come out with any practical models coming near to longstanding Tamil aspirations, Tamil activists in the North commented.

In the meantime, a former Communist power, enjoying benefits from the crisis in the island, is spending lavishly on media, especially on Tamil media in the diaspora, in addressing minds dejected about the West and India and the activists tagged behind them, but at the same time protecting and shielding the State and regime in Colombo and its military, senior media sources in Colombo said.

Premakumar Gunaratnam, an Australian citizen, who was in Sri Lanka organising the FLSP was abducted in April 2012 by the SL military intelligence and was released to SL Police after 3 days of torture. The SL Police deported him to Australia.

Two FLSP activists in Jaffna, Lalith Veeraraj and Kugan Murugananthan, were abducted in December 2011. Their whereabouts are still not known.